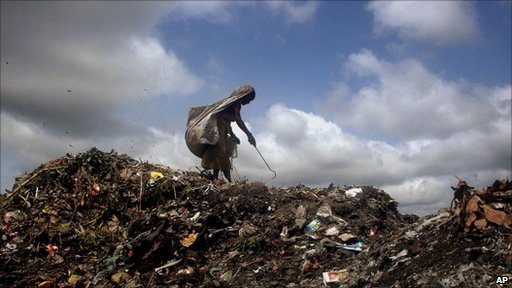 In recent years I think of Mary each Christmas. George Bernard Shaw once said that Christianity might be a good thing if anyone ever tried it. I have a hunch that Mary actually did, and went under. Like the words in Leonard Cohen’s song:

And when he knew for certain
Only drowning men could see him
He said, “All men will be sailors
Until the sea shall free them.”

Mary didn’t matter to the world at large and now that she is dead and gone, without so much as a trace, she should matter even less. I met her a few years ago in a slum in Sevanagar. It was a meeting organised by a local group called Fedina to discuss living conditions in the slum. Some fifteen men and women were present at the meeting. Several of them were articulate and spoke of the drainage overflowing into the huts during the rainy season, of the public toilets that had choked, of the husbands who were drunk, of the women who were beaten up and of the unemployed men who struggled to keep their dignity. Mary stood silently at the back, a little to the side, detached from the rest of the group. She was in her early forties. There was a meditative quality to her face, which made me notice her. The eyes carried a quiet dignity and a touch of weariness. Her face and hands were discoloured with leukaderma. She was the only one in the group who did not speak.

After the meeting I edged myself towards Mary. I was curious. She seemed nervous at the idea of somebody singling her out for a chat. I realised that Mary belonged to that small tribe of quiet observers who did not feel the need to speak much. I gently teased the answers out of her. She told me she was a rag-picker who clambered the rubbish dumps in the area picking rags and used polythene bags. ‘How much do you earn?’ I asked her. ‘About ten rupees a day,’ she said. She could have earned twenty but when the sun got hot it burned the albino patches on her skin and she had to stop work for the day. I asked her if she had children and she told me of the daughter who was married in Hosur, on the Karnataka border. Later I learnt that Mary was unwelcome at her daughter’s home because the husband was ashamed of her discolouration. At the time I did not know if Mary’s husband was dead or if he had deserted her. When I asked Mary where she lived she looked into the distance as if to imply that the question was not significant. She did eventually reply in a voice that carried little emotion. She had no home of her own, she said, but one of the families in the slum gave her place to sleep at night.

Mary had spoken softly, as if things did not matter. She seemed at peace with herself and had little bitterness in her heart. At least that’s the feeling I got. She was content with a frail grip over life. I sensed that the day would soon come when she would be swept away effortlessly with the wind. I noticed that Mary shifted on her feet and winced slightly. ‘What happened?’ I asked in some disquiet. She responded in her usual monotone: ‘A glass piece pierced my foot in one of the rubbish dumps. It went through my rubber slipper.’

It was time for her to go back to her rag-picking. Our brief interview had ended. I watched as she limped off in the direction of the next rubbish pile. That was the only time I met Mary. But she was often on my mind and I had the intention of seeing her again. In the little time I had been with her she had put me in touch with myself, made my small problems seem relative and allowed me a disturbing insight into the dignity of the human person. It is a cliché to say that not all the fine clothes, gadgets and glitter of our shopping arcades during the Christmas season can offer much to uncover the deeper meanings we seek. I really cannot say if Mary was peaceful or unhappy and whether she had the strength to take life as it came. I only know that she held a quiet attraction and I wanted to meet her again. But that was not to be. Mary died a few months later of an unspecified illness. I was told that the rag-pickers in the area collected money and carried her body to the grave. To this day I frequently imagine the motley group weaving its way through the unpaved alleys of the slum and doing the honours at the final ceremony.

A few weeks ago the editor of a newspaper asked me if I would like to do a piece on the occasion of the anniversary of our Independence. I instantly thought of Mary. She would make an intimate story, painted on a small canvas, different from the epic heroes we gloat about during such festivities. I took the help of Joseph, a social worker, to try and locate the hut Mary used to sleep in. We walked about and searched a while without meeting anyone who had heard of her. It was a hot day and the drains were stinking. To use Arundhati Roy’s memorable expression, the smell of shit hung over the place ‘like a hat’. Along the alleys vendors squatted on the earth selling almost-rotting bananas, wood-apples, small guavas, and brightly coloured sweets humming with flies.

In due course we met a ragpicker who was of help. “She lived with the Muslim woman, Amina,” he said, “It’s a couple of kilometres away.” He went on to give us directions. We traversed a variety of aromas and smells before we reached the little hut. Amina greeted us warily. She was short, stout and grey. Perhaps she took us for policemen in plainclothes, come to harass her about something or the other. She relaxed visibly when she learnt we had come to talk about Mary. For the next half-hour she talked about her former inmate. Her narration was interrupted with chokes and sobs. Amina told me about her first meeting with Mary. It had rained that evening and she was rushing home, plodding through the slush, to cook supper for her two adopted sons. There was still some distance to cover when she noticed a figure squatting under a tree. It was a woman, drenched and shivering. Amina walked up to the tree and patiently nudged a response out of the woman. Discovering that she had nowhere to go, she took her home. That was how Mary ended up living with Amina.

“Where did Mary sleep?” I asked Amina, wondering how four people could squeeze into the tiny space within the hut. “She slept out here,” said Amina pointing to the thatched overhang at the door of the hut. There was a small pushcart parked there. I assumed the pushcart was moved at night and Mary slept under the thatched projection. But that was not the case. “Mary slept in the cart,” Amina clarified, reading my mind. “You can see there is hardly any place inside my house. And the cart cannot be left out in the sun and rain”. The pushcart was used to vend vegetables and fruits. It was the most precious object Amina possessed, apart from the little hut she proudly referred to as her home. The cart was small and Mary would have had to arch her back and bend her knees to fit in. Amina went on to say that she and her children missed Mary. I could see she was being genuine. Mary had died when Amina had gone away for a few days to visit relatives. “We don’t know what she died of,” Amina sighed. “She coughed and shivered for a day. The woman next door took care of her. By the evening she was dead. She never complained. Such a good person. No husband to take care of her. He left her, like mine did too.”

I had seen the hut, or rather the pushcart, where Mary had lived. I had met Amina, the generous Muslim single-parent, who had taken care of Mary, the deserted Christian rag-picker. There had been no premeditation here. Amina in her vulnerability had responded to Mary, who, despite her appearance of calm, had been equally vulnerable. Leonard Cohen was right. Only drowning men could see Him. I thought of the attempts to divide Indian society along religious lines and realised how much of an engineered thing it was. In the thick of life, in the slums and villages of India, there was still much room for the simple give and take that transcended religious divisions.

*Siddhartha is the founder of the inter-religious centre, Fireflies Ashram, based in a village outside Bangalore, India. He is also the coordinator of the Meeting Rivers programme.

Meeting Rivers is a global platform of religious, spiritual and secular actors who bring fresh understandings, experiences and solutions to the inter-related challenges of personal change, social transformation and ecological engagement. We are hopeful that the Meeting Rivers bulletins will help contribute to the growing search for sustainable solutions. You can access the previous dispatches of Meeting Rivers at: