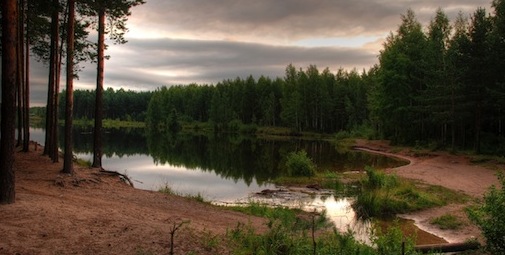 Just before dawn I come to sit by the lake and watch quietly as the early silver light blends delicately with the water’s reflection of birch, pine, rocks and clouds. I feel the natural presence of the forest and the native company of brown bear,elk and wolf. There is a fragrant stirring of Eurus, the East wind, gentle and warm, motioning out of Siberia. Playfully, I try to see its colour.

During my childhood in rural Ireland there was a remarkable woman who often inspired in me wonder. I recall one of our many walks together. We passed the old village graveyard with the wind coming soft and warm from the west and rays of light streaming down between billowing clouds. As she held my hand, she whispered, “Listen carefully to the wind, it brings stories and rays of light can tell you of a soul’s journey.” Another time, when a hard, moaning wind came from the arctic north, she declared it a “black wind”. She indicated such a wind can bring illness and that one needed to avoid it. I didn’t question her, for I felt there was substance in her ancient lore.

The influence of her wisdom about the elements remained with me over the years, but I did not begin to question where the roots of her extensive knowledge lay until I began to study Chinese medicine. The texts of this ancient system delineate (among many other things) the qualities and colours of wind and classify them as either internal or external, the latter of which is regarded as one of the six external causes of disease. When the opportunity presented itself to research medieval Irish medicine, I found there a wind system similar to the ancient Chinese along with treatises on the benefits of leeching and water therapy.

I subsequently began to approach folklore differently than I had for it became obvious that it contains traces of ancient cosmology. With this discovery I faced a dilemma, for I found that to proceed with research in this area a critical mind alone was insufficient, what I also needed was accurate sensory awareness.

In Ireland, the old Gaelic order with its complex Brehon laws declined and came to an end by the mid-seventeenth century. Over the years I have kept alive a curiosity that has been sparked in me hundreds of years later in a rural part of the country by way of stories and lore, a fragmented knowledge that was retained by those who had an interest and a need and passed it from generation to generation. In my life I have deepened the search for an understanding of such ancient methods of healing as fasting and the sweat house, and what may be the meaning, if any, of the wind and its colours. 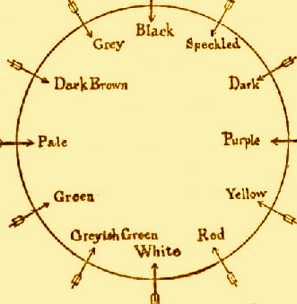 The colours of the twelve winds constructed from the description in the Saltair na Rann. (The title Saltair na Rann “Psalter of Quatrains” refers to a series of 150 early Middle Irish religious cantos, written in the tenth century.)