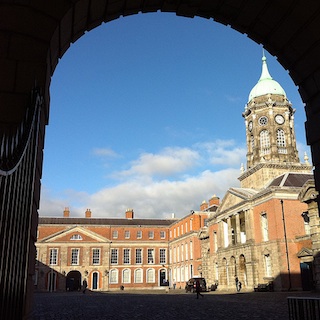 Keeps drawing me back

On a recent visit to Dublin I had the impression that it had become once again the dirty old town that I had lived in decades ago. The remains of what was euphemistically called the ‘Celtic Tiger’, a fantasy of bubble blown wealth, is wasting away but leaves a gobbling hunger (1) of generational debt. Down by the walled-in Liffey, beggars line the quays. There is renewed large-scale emigration, unemployment, and social deprivation, while across the river in the Four Courts with its wigged barristers, several of the leading speculators who were blindly driven to excess by the lure of easy millions, sling (2) blame.

Dublin is small enough to be a town, large enough to be a city; some parts of it are an assimilation of villages and like the area of Rathmines, retain such an atmosphere. For a period Dublin was the second largest city in the British Empire and fifth largest in Europe. Throughout the 18th century it aspired to Georgian grandeur through the building of fine, measured squares, parks and town houses. It’s then Protestant ascendancy had, for a time, a form of home rule, and the sun (maybe) shone for a short while. But the opportunity was sold away through bribery and corruption culminating in a mismatched political and economic union with London in 1801. The city then gradually decayed and became for many a place of stagnation, poverty, and expanding slums, which were compared to the worst of Calcutta.

In visits throughout the recent decade of boom, I would on occasion step away from the potholes (3) of glamour, the new wine bars, the overcharging restaurants, the flaunting of insecure wealth, to walk along the grim back streets near Mountjoy Square or through parts of the Liberties to be met by the wrecks of black heroin, raging cocaine, and desperate prostitution.  Had anything changed from my youth when on the same streets I spoke with fractured men their insides disintegrating from drinking cheap meths and melted boot–polish? Then and now damp, speckled weather bore down on ragged alleyways strewn with broken glass and the stench of ammoniated urine. There it was and remains a hard life for poor inner city Dubliners who try in the midst of it all to raise their children well, to steer them away from the fierce, killing gangs of criminality (4).

I always associate Phil Coulter‘s song, ‘The Town I Loved so Well’, with Dublin (especially when I hear the singing of it by Luke Kelly), and although there were times when I fled the city something corresponds, keeps drawing me back, for there is something about it that has a beauty, and if one opens to it, a poetic expression cherished by old Dubliners who value the spoken charity that allows for the crack between the words that helps the radiant light to fall lightly upon the grey. They are helped too (as it aids me) by a dark, bawdy, communal humour which strips down pretension and releases the laughter embedded in the psyche so that for a brief while it blends with the haunting cry of seagulls as they soar in a wild roving wind over Christchurch Cathedral.

Phrases that can be heard around different parts of inner city Dublin, especially Moore St and the Liberties also in the hill country of East limerick, and North Tipperary. In the Liberties area you hear a blend of language that grew out of Old English, Elizabethan English, Middle Irish and Norse Viking

1. ‘Gobbling  hunger’ is embedded in parts of the Irish psyche. I suspect the term may in part stem from what is referred to as the Great Famine of 1845 -1848, when some desperate people ate grass, it may also stem from one of the creatures in Celtic Mythology whose destructive hunger could never be sated. The expression ‘gobbling’ is commonly used for eating food greedily or hurriedly.

2. The word ‘sling’ I have heard used in reference to an animal miscarriage or shady business. Thus he’s a ‘slung’ business man or ‘slung’ politician. To ‘sling blame’ as I have used it (same as to sling mud) means diseased blame: developers blame the banks, the banks blame the developers, the politicians blame the world situation or the European Central bank or the German Banks or the Bond holders or their advisers and the buck goes round and round with no one taking responsibility.

3.’Potholes’ used in this context means the mirage of fools gold-the water on top reflects the colours of the rainbow-you step in and sink.

4.’Gangs of criminality’ are the murderous gangs that grew up in the 1980s around (especially) cocaine and heroin and took hold, since so much of the state’s security and police resources were diverted to containing the threat from the destabilization of Northern Ireland. They truly are murderous akin almost to the ‘Irish mafia’ in the United States in the 1920’s.