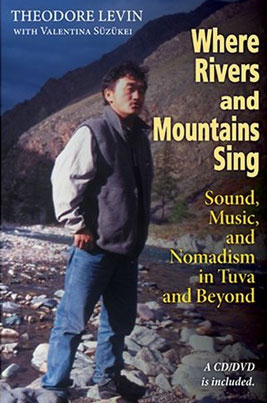 Where Rivers and Mountains Sing: Sound, Music and Nomadism in Tuva and Beyond, Indiana University Press, Bloomington, Indiana (USA), 2006, ISBN 0-253-34715-7

This is Theodore Levin’s second book. Like his first book, The Hundred Thousand Fools of God, the narrative revolves around a search for indigenous traditional music, although this time the geographic area is the small Republic of Tuva, bordering Mongolia and five administrative units of the Russian Federation. This region is renowned for throat-singing – a particular style of singing in which a singers produce a drone note whilst simultaneously generating higher harmonic notes that can form an overlying melody.

This music evolved from the herdsman who still move their herds of cattle, sheep and goats between the winter and summer pastures high on rolling grassy mountains of the steppe, and over the generations became highly attuned with the sounds of nature around them. In order to ensure that the animals have enough to eat, the herdsman need to know precisely when the conditions are right to move between seasonal grazing areas. They do this through being aware of the changes in the call of migratory birds, the strength of the winds and the sounds made by running waters in streams and rivers. Throat-singing and the mimicking of animal sounds are the natural result of the Tuvan peoples’ close proximity to, reliance on, and synergy with nature.

Levin was determined to record examples of Tuvan music within its natural environment. The book contains many vivid descriptions of excursions to particular rivers, caves and mountains with master musicians looking for the correct natural acoustics to frame their music. It also contains a detailed description of a cleansing Shamanic ritual using a number of musical instruments and drums which left the author with a deeply felt inner silence. In many ways it is astonishing that any of this tradition has survived the influences of Soviet Communism (which zealously persecuted Tuvan Shamanistic traditions), and alcoholism, which is rife and has claimed many musicians’ lives in recent years.

The book exposes some extraordinary contradictions which Tuvan musicians face. These are exemplified by the Tuvan group Huun-Huur -Tu, which has become famous world-wide for championing throat singing, but now spends months each year playing in concert halls and clubs around the world, and is indeed feted as a “supergroup” in countries such as Greece. The name Huun-Huur-Tu is Tuvan for “Sun-Propeller”, aptly describing the shafts of sunlight through the clouds on the steppe.

A question is raised once again about how ancient traditional music can survive dissemination to a global audience far removed from its origins and purpose and which, in places, appropriates the music for different purposes (in this case, the use of throat singing by a number of Western “healers” to treat patients). Some of the musicians interviewed by Levin offer some interesting observations on the differences between Western and Tuvan music, for example “Wood, skin and hair – these are the materials at the root of Tuvan music….Our music is a lot more natural, and real Tuvan music isn’t aggressive [compared to Western music]. It’s not performing for someone else, but first and foremost for oneself.”

Apart from the fact this is a thought provoking and entertaining book to read, a double-sided disc is included which contains film of Huun-Huur-Tu and other musicians performing, together with forty cd tracks of a range of Tuvan music. There are some extraordinary pieces, including examples of throat singing where the singer mimics the sound of a running river. What is most striking is the strength of feeling evident in some of the playing, together with surprise that after a short time of listening, this “alien” music sounds so natural.

Readers may also be interested in a link advertising an earlier recording made by the author :-