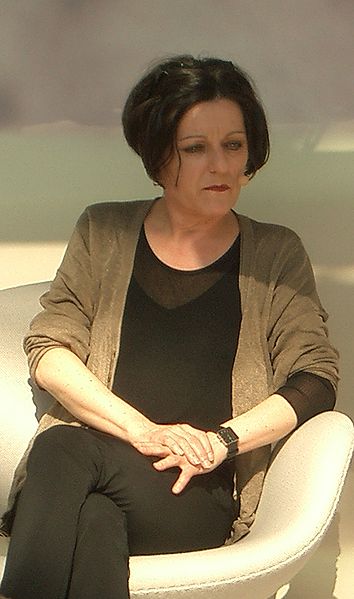 The day after I finished reading this book in the original German, a strange review of the English translation appeared in the Telegraph. More of that later.

Herta Müller, who won the Nobel Prize for Literature 2009, was born in Transylvania. After the First World War, the victors took the spoils, and the losers had to suffer. Transylvania had been administered by Hungary in the Austro-Hungarian Empire, but after the war, the region, with its one and three-quarter million Hungarians and nearly one million Germans, was transferred to Romania. One very long sad day, those people found themselves in Ceausescu’s grip.

This short novel is set in that time in a German village in that region, where people dream and try to plan to get out, and go to Germany. It is very difficult, though not impossible, to get the necessary papers. Gradually, the inhabitants, and the reader, discover the way. The family wishing to emigrate need to have an attractive woman. First she must sleep with the postmaster, so that the postmaster’s drunken wife does not remove the stamps from the essential letters (in order to sell them and buy liquor for herself). Then she has to sleep with the priest, so that he can “search for the birth certificates”. Then she has to sleep with the head of the local Romanian militia, so that the papers are forwarded to the authorities. But the letter may be “mislaid”, the birth certificates “not found”, and the papers “unfortunately failed to arrive”, necessitating several visits to the postmaster, the priest, and the militiaman.

From the very first sentence, one realises that the author has adopted a laconic style of short statements. For example: “He looks down the street. Where it ends, the grass is breaking into the village. There, at the end, walks a man. The man is a black thread, going amongst the plants. The breaking grass lifts him above the earth”. (Page 2, my translation). What do we make of statements like the last sentence? There are many such in the book, and they build up a certain impression. According to the Telegraph, they indicate the diseased mind of Windisch, the principal character. When an owl circles the village and lands on a house, it means that someone in that house will die- which is in fact what happens, but the reviewer calls it a “mythically elusive” symbol. The reviewer also claims that Windisch is anti-semitic; if so, I missed it completely.

At first I found the style very artificial, and the so obviously non-realistic statements irritating. But I eventually relaxed and accepted it, feeling it to be a way to convey, at a distance, the appalling horror of life in those circumstances. The impression conveyed is that everything and everybody is unrelentingly grey, grey, grey. No wonder all in the village are obsessed with sex; what else did “life” have to offer?