Following my remarks in January’s letter about the problem of homelessness in Paris, I should explain how it is sometimes easy for people to fall into the kind of poverty that leads them to be expelled from where they live. Although there is unemployment benefit in France, the right to it has a limited duration. It is based on a proportion of the salary before being made unemployed, but this proportion is diminished progressively until the right to it ceases altogether. The question of what to do for such people has become an urgent one. It has been estimated that due to the sudden rise in unemployment last year (due, of course, to the world financial crisis) some one million people will lose their entitlement in the next few months. Many of these will be entitled to other grants (minimum job-seeker’s allowance, pre-retirement grants and so on) but some 400,000 will lose their entitlement without having any other aid. This constitutes a major challenge to the government if it is to avoid a further rise in the poverty that leads to homelessness. It will be interesting to see what solution emerges.

The main problem, it seems to me, is that it becomes impossible to imagine the individuals behind the statistics. The problem of financial insecurity is a recurrent one in France, recently highlighted by the journalist Florence Aubenas in a book, entitled “Le Quai de Ouistreham”, that has provoked a good deal of discussion here.

Florence Aubenas is well-known as a journalist, not least because she was held hostage for five months in Iraq. To write the book, she settled in Caen, using her own name but taking on an assumed identity as someone with poor qualifications and little work experience. There she tried, as so many others in similar situations, to find a job with a minimum of security, but in fact during six months she was only able to find temporary jobs (on the ferry, on campsites) which did not even pay enough for her rented room (348€ per month). What her experience revealed was nature of the difficulties faced by people in such a situation: the handicap of not having a mobile phone, internet access, a car and so on. There is a kind of vicious circle which often leads people to give up or to become depressed. The book seems to be in the same tradition as George Orwell in English, or of Simone Weill in French (the latter wrote a remarkable book on the experience of being a worker in a Renault car factory in the 1930’s). Whether this latest foray into the lived experience of insecurity will have an effect on legislation remains to be seen.

On another subject, this month saw the death of Raymond Mason, an English artist who had lived in Paris since 1946. Although he was well-known here, his death does not seem to have been marked in the press. I saw an impressive exhibition of his work last year. He was not only a fine draughtsman and painter, he also worked in three-dimensional forms, either transforming his paintings into depth or making sculptures. Some of his work is in public places: the Tuileries, or the church of St Eustache. This church is well worth visiting on any account. It is on the northern edge of what used to be the Halles market. Since the market was moved and the area transformed in the 1970’s, the church is much more visible from a distance. The interior is impressively high, with a fine light. Another reason for visiting the church is the organ, and there are free recitals every Sunday before the evening service. These are usually given by the resident organist (who has occupied the post for many years) Jean Guillou, one of the finest organists in France. 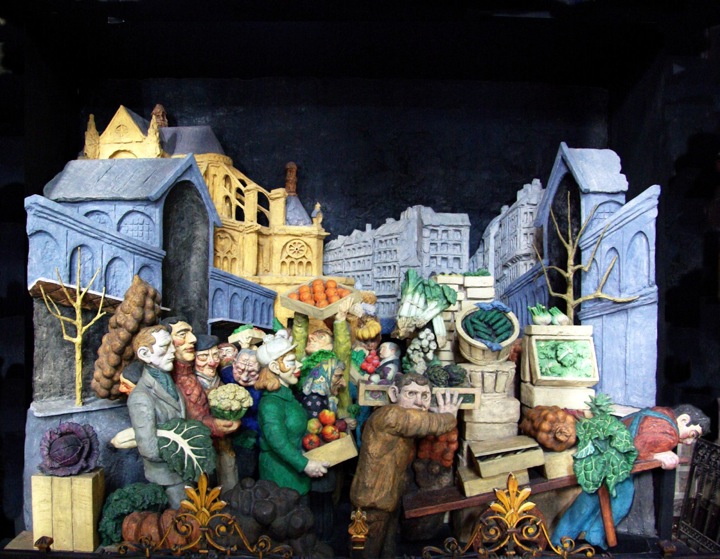 “The departure of the fruit and vegatable market from the heart of Paris, 28th February 1969” by Raymond Mason

Located in one of the side chapels of the church of St. Eustache