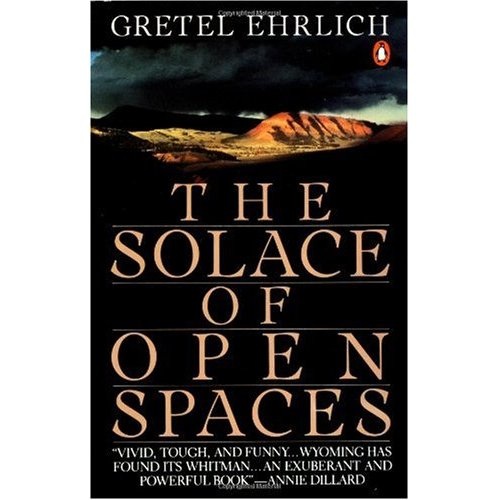 Gretel Ehrlich was struck by lightning and survived to tell the tale.

But “The Solace of Open Spaces” is not about that experience. It tells what happened after she suffered the loss of her partner, and moved from the West Coast of the United States to the wild lands of Wyoming. She turned her back on the past, completely. Her training as a documentary film maker with many friends, was exchanged for training as a mounted sheepherder among complete strangers.

When someone told me the title of the book, I immediately imagined an account of quiet meditation and even mystical experiences, perhaps with some kind of spiritual mentor included. My imagination was correct and incorrect at the same time. The meditation came, but it was evoked by the harsh impact of desperately cold winters, implacable wild animals, people little given to lengthy conversation and the round of the seasons in Wyoming territory.

The mentor was the land and its people. Gretel Ehrlich took all these new experiences with a mixture of fortitude and almost relish:

“On the winter solstice it is thirty-four degrees below zero, and there is very little light in the way of full daylight. The deep ache of this audacious Arctic air is also the ache in our lives made physical… We rub the frozen toes of a stranger whose pick-up has veered off the road… Twenty or thirty below makes the breath we exchange visible… It is the tacit way we express the intimacy no one talks about.”

Her writing succeeds in taking a number of threads, like a skillful weaver, producing a thick carpet of experience which is simultaneously intimate, knowledgeable, perceptive, open and sensitive:

“Even young cowboys are often evasive with women… they don’t know how to bring their tenderness into the house and lack the vocabulary to express the complexity of what they feel.”

Her presentation of the relationships between men and women in the open spaces of Wyoming is very touching and compactly expressed. She demonstrates no self pity in her descriptions of the trials of the life she had chosen. In one scene she does show how the laws of nature in the wild are hard to accept: an eagle has fallen and injured itself. She watches as it stumbles around, unable to take flight. She takes water up to the bird, and someone drags a dead calf close to it so that it can eat.

She encounters a wide range of people in her work. Native Americans are seen doing the Sun Dance, a ritual banned in the late 19th century but in modern times undergoing a revival in the form of “Spirit Quest”. It is a ritual of considerable hardship and pain. It is strange to read of it taking place in the company of pick-up trucks and tweed jackets instead of paint ponies and breech clouts.

Reading “The Solace of Open Spaces” is a delight. It is being fed from a hamper of Ehrlichites, you can dip into it and simply read a paragraph to feel that you have eaten with the writer. All too short at 131 pages, read it and be happy that you did.