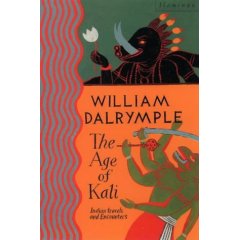 Politics, crime, corruption, politics, murder, family feuds, politics, tribal wars, rape, politics… It might be about Zimbabwe, the Sudan, Russia, Iran, Kenya, Congo, Nigeria… in fact, it’s about India (with a bit about Pakistan), seen and described from the outside, “facts”, stories of decay and degeneration. But the feeling for the country is missing- and how can a country be understood without feeling? What is India? It cannot be understood from a conglomeration of “facts”. One chapter, though, is an exception, that on Sari Mata. But it is a difficult story for “westerners”- those who have adopted the modern outlook on life (that is, the mental rational view which has more and more prevailed since the so-called enlightenment in France).

Sometimes a widow in India has chosen to climb onto her husband’s funeral pyre, sacrificing herself to ensure her husband’s successful rebirth, joining her soul to the Goddess Sati Mata. The practice of Sati was banned by the British in 1829 and is said to have died out except in some remote parts of Rajastan.

Some years ago, a beautiful young widow, middle-class, well educated in the city of Jaipur, but deeply religious, lost her young husband. In her village the following morning she appeared in her finest wedding dress, decked in jewellery… and was burned to death on her husband’s pyre. Her family and the villagers said that she resisted all attempts to dissuade her from becoming a Sati, was extraordinarily calm, and smiled beatifically as the flames danced all around her.

Within a fortnight, three-quarters of a million people came to worship at the site of her pyre. But the police, the state government, Indian feminist organisations and the English-language media implied that it was a barbaric public execution. The police charged 37 villagers with murder. Many stories, one more grisly than another, appeared in the press. The Women and Media Committee of the Bombay Union of Journalists claimed that, according to an unnamed “Congress Party worker”, the widow had been dragged through the streets by 600 fanatical villagers- a version endlessly repeated in feminist literature as gospel truth, despite the fact that the anonymous “Congress Party worker” has never been named and did not appear at the trial. Although the police beat those arrested and tortured then, not s single witness could be produced to testify that the widow had been compelled to become a Sati.

After a decade, the villagers were acquitted. Indian papers were outraged at the acquittal and the Government of Rajastan said it would appeal. The Chief Secretary of Rajastan said that voluntary Sati was impossible in modern India, and the Superintendent of Police agreed. All the villagers became afraid of telling the truth.

But Dalrymple eventually found an old man who told him that he had been there, together with all the other villagers, and had seen the Sati. “She was not forced. Absolutely not…” “Don’t you feel you should have stopped her?” “No one can stop a Sati…. if anyone stops a Sati they will be cursed”. “Did she try to get off the pyre?” “No. It was her choice. Sati is something from inside. It is no Sati if it is forced. When the fire was lit she just sat there with her husband’s head in her lap. She seemed to feel no pain… Satis have a special power…” “What do you think of the law banning the glorification of Sati?” ”These are ungodly times. These ladies from the women’s organisations… tell us that we burn our daughters by force. Do they think we are animals? When Lord Ram was the ruler, he allowed Sati. So who are these people in Delhi to ban it? This is the Kali Yug, the Age of Kali, the epoch of disintegration. Ungodly things are happening all around us….”

This story throws an unaccustomed light on all the others.

To read more on the Kali Yuga

This book contains a series of nineteen essays on William Dalrymple’s journeys over a decade around the Indian sub-continent, from an account of meetings with the chilling Tamil Tigers to the gun obsessed drug barons of the North West Frontier and visits to places that any sane man would avoid. A vivid and startling picture emerges of the two contrasting streams of modern Indian life, how it’s long history of tradition and religion is now being contradicted by Western ideas of progress, which in turn has unleashed unparalleled level of corruption and communal violence.

The book’s title comes from the ancient Hindu cosmology that time is divided into four great epochs, the last in series being Kali Yug, the Age of Kali which is the epoch of strife, decay and disintegration. From some of the chapters in this book you feel that this epoch has arrived, the essay on Bihar where the local MP is arrested for encouraging his supporters to murder a civil servant, yet still attends Parliament, is only a reflection of the anarchy and lawlessness of that State.

His account of his visit to island of Reunion, in the Indian Ocean is fascinating, speaking French, the islanders are nominally Catholic, Muslim, Hindu or Voodoo worshipers. These religions that exist side by side reflecting the ethnic mix of this Island’s population that have become culturally intermingled, along with their beliefs, over the centuries, The description of an 18th Century grave of a pirate called La Buse, and that of the sorcerer and murderer, La Sitarane, who was guillotined for his crimes and now both used as Voodoo shrines, mostly by the Hindu Tamils, is an example of this.

The chapters on the rich and influential of both Pakistan and India such as ex Prime Minister Benazir Bhutto and best selling author Shobha De show how far removed they are from the reality of rest of the sub continents population. From unbridled corruption and a passion for Mills & Boon novels to attending a party where the hostess has had the gravel on her drive shampooed, the author paints a vivid picture of another world.

Like the other travel books he has written, William Dalrymple’s accounts of his South Asian travels is highly entertaining and he reports on areas that other writers do not reach, often at great personal risk. His writing lays before you a truthful and colourful panorama of the Indian sub continent as it exists today, of places and people rarely glimpsed by visiting tourists and TV crews.