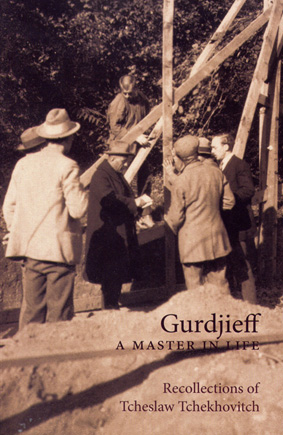 This is not a book for everyone.

It is not that it is difficult to read- the language is not difficult, and the chapters are short, or in short sections, and they are also very varied- serious, humorous, touching by turn. But what is meant by “master”?

We may remember, dimly, that from mediaeval times in Europe (and much earlier in other cultures) there were master craftsmen. There existed Guilds, and if you wanted to learn a craft, you had to begin as an apprentice to a Master, first doing simple, often menial tasks, then becoming an assistant, and finally- in rare cases only- submitting a work of your own which, if it was approved as a Masterwork, entitled you to the appellation Master, and the responsibility of teaching others in your turn.

So, a Master teaches. But in spiritual traditions, a Master is more than that. He embodies the teaching- he is the teaching. By his own life he gives such an example that his pupils, in witnessing his mastery, are inspired to emulate him. Emulate, not imitate- for we each have to discover our own true nature and be ourselves. An important part of the task of a Master is precisely to discourage imitation, providing conditions in which this self-discovery can take place, which alone can free the pupil from his attachments and false ideas and beliefs- above all, his mistaken ideas about himself.

The teaching itself, therefore, is a means. It will include knowledge about human beings, about the world in which they live, about the great cosmos in which life on earth has a part, and about the true origins of “things”. How did it all come to be? Why are we on the earth? What for? Is it for something?

Such knowledge may be only theoretical. Through a lifetime of studying ancient texts and books of philosophy and theology and science, we can stuff our minds with more and more information and may believe that some of them are facts- but do we really know anything truly unless we have experienced it ourselves? The task of a Master is to make it practical- to give each pupil the opportunity to discover the truth and become convinced of it with the whole of his being. The Master, therefore, and the pupil in turn, must be part of an unbroken chain of being, of an oral tradition.

This book gives no account of the ideas of Gurdjieff’s teaching. Each episode is a description of the Master at work, the Master in life. How did he live? What did he “do”? What did he say- or not say- to a pupil? And at what moment? How was he in the face of the difficulties of his own life- and how did he respond to the difficulties of others? What inspires a Master?

This book can only give us clues, clues to make such questions more alive in us and help us, if we wish it, to find and follow a spiritual path ourselves. The demands which Gurdjieff imposed on himself, the suffering he accepted, the love and compassion he manifested, and the respect and love which arose in response, are vividly evoked by this unusual book. It is unusual not only because of its unique testimony to aspects of Gurdjieff’s life never before described and over a long period of time- twenty-eight years- but because of the quality of its feeling. And that makes it difficult to read. We are not at all used to that. It evokes doubt in one part and, in another, touches us deeply at the very same time.