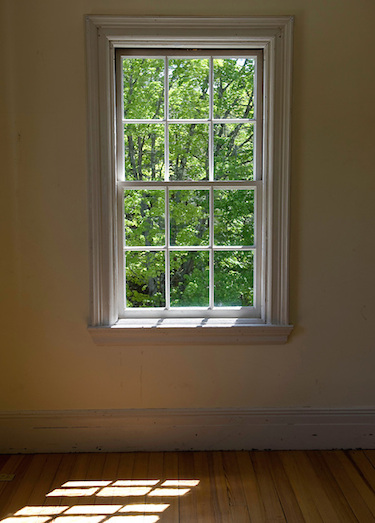 I am sitting in front of my laptop. The sun is shining brightly, the windows are double-glazed, and it is quiet.

The mother-cat purrs as she gives birth to kittens, and licks them lovingly all over. When they have all arrived, the placenta comes. The cat eats it, though no mother or scientist told her that the hormones in it will bring her milk down.

In the pond there are water-boatmen, tiny snails, newts, frogs, and now there are dragon-flies mating. (There have never been any so early as this year).How did they all get there? The pond is recent, man-made, and there are no others nearby- not within frog-hopping distance. Can they smell water?

As a child, on holiday in Italy, I went under the clusters of a vine to lean over the wall of the well and look down. Dark, deep- just blackness. It was a very deep well. When one sent the bucket down on its chain, it was astonishing each time how long it took until the splash at the bottom. But it seemed to me that in that great heat which penetrated the shade of the vine, I could smell the coolness of the water far below.

The sense of wonder has always been there, and sometimes I have been with it.

Why am I here? On the planet, I mean. Just one in some unbelievable number of people living with us. Small, insignificant. The earth seems very big to me, but it is one of the smaller planets, and the sun itself has almost all the mass of the solar system in it. And the solar system is not in the centre of the universe, so vast as to be incomprehensible. So does my life matter? Does even our life- all of us- matter? Is all this is an accident? The conditions on the earth just happened to be right- and over aeons of time accidental mutations led to the development of more complex and intelligent forms of life. And finally, a form, the human form, which could even ask the questions I am asking. Surely, if it is an accident, it matters not at all. This particular accident may interest us, but that is a very parochial view. On the scale of the universe, it is insignificant. If life has no meaning, its pleasures no more than gratification of the senses and a spurious sense of power from using the mind, then it does not matter if I kill you, or you kill me, or if all life dies out down here.

But we know in our hearts that it does matter. Life matters. This extraordinary gift must be for something. Yet we can easily be deluded. Those who murder in the name of some belief surely are deluded, as are those who believe that the solution is to kill the murderers. But then, was it a mistake to go to war with Hitler?

Save the whales….. save animals from cruel exploitation….. save the environment…. fight global warming….. fight GM foods and the supermarkets…. fight war. (Fight war!) It is easy to find things to be against. Perhaps some of these phenomena of our time can be influenced. Will a better world emerge? What would be “better”? Why are things as “bad” as some of us believe them to be? Can we identify the culprits? Capitalists- communists- fundamentalists- who is to blame?

You and I? Perhaps our “fault” is not that we do not protest, or don’t do enough recycling. Perhaps it goes much deeper, in all of us, everyone, loved ones, friends, and enemies. The world is as it is, because we are as we are. “Change- why change? Aren’t things bad enough already?”

Is inner change possible? Have we learnt that talk of love, freedom, brother/sisterhood, ideals which touched us in our youth and which, if we are quiet and attentive to ourselves, still have a mysterious appeal- it is not talking which makes them possible? When Jesus and certain others spoke of such ideals it was not the words which touched the listeners, but the being of those from whom the words came. They had a quality such that they were able to help others to find a way towards change- a way towards discovering who, essentially, they were.

How can we live…. how can we find our way? Are there any real ways to inner change…. and are there any trustworthy guides?