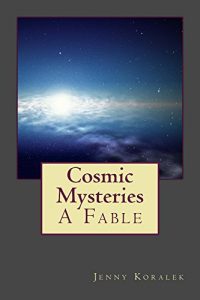 News came of an unusual manuscript available on the internet. It was heralded by an arresting image and an enigmatic title: as an Amazon e-book it had an invitation to ‘Look Inside’. When I wished to read more there was a ‘free ap’ to be downloaded. So even without a kindle, there was the entire book before me.

In the Cosmic Mysteries, women from the bible appear from the mists of time, and speak from the heart, indeed some from the Old Testament, previously just names on a printed page, spring to life, their true meaning revealed. Maryam and Elizabeth experience the events played out through them which were set down in the New Testament by the writers of the Gospels. As the women speak of their own lives, and the preparation they underwent, so the reader is drawn inwards to participate in their struggle for wholeness, the joy, pain and loss, patience and forbearance.

On a hot summer evening when I had just finished reading this book I felt deeply refreshed. Outside there was a breeze gently vibrating in the trees and I felt awoken to a different awareness of the world, an appreciation of what it is to be alive.

Subsequently hearing that the book is available from Amazon in paperback (still my preferred format), I relish the prospect of rereading it. L.C.

Cosmic Mysteries: A Fable – From the author

Over many years of studying and reflecting the question came to me: suppose the mothers of Jesus and John the Baptist were not two simple village girls, taken by surprise at every turn, but young women who had been educated and rigorously prepared for their roles?

And where? Perhaps in a remote community not unlike that of the Essenes-those demanding spiritual retreats for men only?

And how? Since my perspective on the biblical stories both in the Old and New Testaments would be in the form of a fable could I take magical liberties?

Could I bring all the key women in those ‘Testaments’ to meet with Maryam and Elizabeth, starting with Eve and ending with Maryam of Magdala? Could I conjure up mystical, magical visitations in the cool of the evening among the olive groves?

Did I dare suggest the deeper meaning of ‘virgin’ as expressed for example by Meister Eckhart is wholeness in one’s being?

And Judas? Did I dare to suggest – and I am not the only one – that he was not a betrayer but a most loyal friend, who accepted the hard role he was destined to play? There is a painting in a chapel in Italy which shows him embracing Jesus at the very moment of handing him over, the two looking into each others eyes with loving connivance.

And the serpent ? Not evil incarnate, but the embodiment of the life force in all its strength?

And God? Not a capricious old man with a beard in the sky, but a fine vibration of colossal energy far beyond our comprehension?

Jenny Koralek is an established children’s author and editor, having had numerous books and short stories published over the past 35 years with, among others, Penguin, Hamish Hamilton, Walker Books, Frances Lincoln, CUP and Egmont in the UK and with various noted publishers in the USA. In addition, several books have been translated into Danish, Dutch, Finnish, Greek, Italian and Norwegian.

She is also the author of Mother, Do Not Weep for Me, a memoir of her son’s life and untimely death and co-editor of A Lively Oracle, A Celebration of P L Travers, Creator of Mary Poppins.

Initially inspired by her close friendship with P L Travers she became, alongside her writing career, a lifelong student of mythology and spiritual traditions.