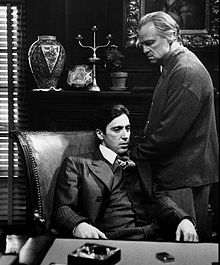 These two films, released in 1972 and 1974 are arguably the greatest works of Francis Ford Coppola, the Italian-American film director. Based on the novel of the same name by Mario Puzzo, the films portray the gradual metamorphosis of Michael Corleone, the youngest son of the Godfather of one of the New York Mafia families, from an idealistic second world war hero to a ruthless, amoral successor to his father. The way in which Michael’s family background and events conspire to gradually enmesh him in a totally different life from what even his own father envisaged for him is conveyed in an utterly compelling way.

There is so much to admire in both these films. Firstly the meticulous recreation of the periods – from the flashback sequences of the 1920s in the second film to the forties and fifties. Coppola used large numbers of extras from Italian immigrant families in New York for the community scenes such as the wedding early in the first film, and this gives both films an almost documentary quality. The cinematography, script, soundtrack, editing and acting are masterfully orchestrated by the director. Marlon Brando received the Best Supporting Actor Oscar for his masterly portrayal of Vito “Don” Corleone but Al Pacino’s performance is mesmeric, and he is ably supported by James Caan as his older and wilder brother, Robert Duvall, and Diane Keaton. In the second film, Robert De Niro memorably portrays Vito Corleone as a young man.

Both the films have violent endings, but in the first film this is made even more shocking by the brilliant juxtaposition of crimes with scenes of Michael Corleone attending his nephew’s christening. The viewer is made to realise that it is the perpetrator of these terrible crimes that is also the victim because of what he destroys in himself. There is real tragedy here – how deep love for one’s family and a sense of duty and honour can become twisted into cruel violence and an exploitative contempt for anyone outside the extended family circle, resulting in the very opposite of love, and terrible isolation.

In spite of what the central character becomes, the viewer somehow still sympathises with him. The viewer is left to wonder – did Michael Corleone have a choice? On a smaller scale don’t we all have these inner contradictions?

Masterpiece is an over-used word but for these two films, that sobriquet is entirely justified.