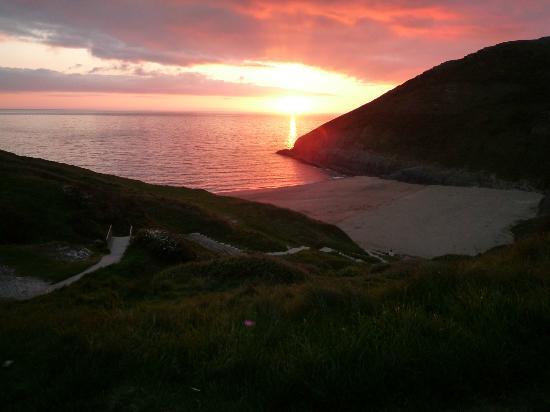 We spent two weeks in this part of Wales last summer, staying in a cottage in the ancient village of Cilgerran, close to the Teifi Gorge, a protected nature reserve where the River Teifi has carved a 2 mile long, tree-lined cleft in the landscape. Most mornings and evenings we would walk down to the gorge, appreciating the increasing quiet as we descended to the water. The footpath undulated as it followed the river upstream – at one point passing some ancient ruined quarry buildings long overgrown with great trees. Numerous sheltered coves beckoned us to scramble down to the water’s edge. The silence was punctuated with birds calling, trout jumping, and on one occasion the large splash of an otter being disturbed. Bats fluttered inquisitively around us we watched a heron flying silently down the middle of the river, barely a metre above the water.

One day, we dropped our children off at Whitesand Beach for a surfing lesson whilst we visited St.David’s, the smallest cathedral city in the United Kingdom. We were surprised to find a vibrant, welcoming community with a lively market close to the simply built cathedral which in spite of being almost devoid of any ornamentation has a special atmosphere. We returned to the surfing school to find our 16 year old son able to stand on the board and catch the waves. Since that holiday, access to surfing beaches has played a significant role in his choice of universities!

Although the inclement British weather conspired against us, we managed to find a variety of outdoor activities for the children including kayaking and canoeing down to the Teifi estuary, horseriding, and bushcraft. We also discovered some beautiful sandy beaches, including the National Trust beach at Mynt – a hidden cove with a steep cone-shaped hill adjacent to it. A planned short walk to the summit of Foel Cwmcerwyn, the highest hill in Pembrokeshire, with uninterrupted views across South Wales and the Bristol Channel to Lundy Island turned into a memorable ten mile hike after a series of wrong turns, in spite of excellent visibility and having a good Ordnance Survey walking map. There were lots of “little places” that were not spectacular but quietly engaging or surprising, such as the ruins of St.Dogmael monastery, with a sixth century cross and an unassuming cafe which served the best scones I’ve ever tasted.

But one collective experience stands out – a sunlit evening on a powerful RIB (rigid inflatable boat) exploring the Ceredigion coast near Mynt to watch the wildlife. After 20 minutes, and against all my expectations, the dorsal fin of a dolphin broke the surface some 200 yards ahead of us. It disappeared just as quickly but after a short period, it re-appeared, followed by more and more companions until the boat was surrounded by seven bottle-nosed dolphins. They watched us for a while, gauging our intent. The pilot was very skilled in not turning the boat towards them, and we were rewarded by the dolphins becoming more confident and starting to leap out of the water. One of the younger members of the pod completed a full barrel roll. These beautiful creatures radiated intelligence and happiness at being alive but vanished just as suddenly as they appeared leaving us deeply touched and wanting to meet them again. On the way back the pilot opened the throttle and took us through some choppy seas, soaking us with the spray as we jumped through the waves, prompting involuntary shrieks of excitement from everyone. 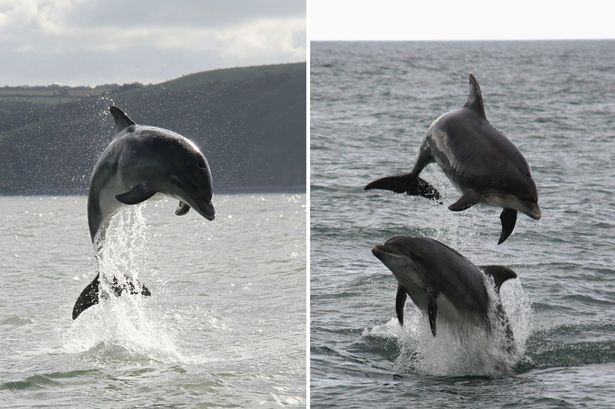