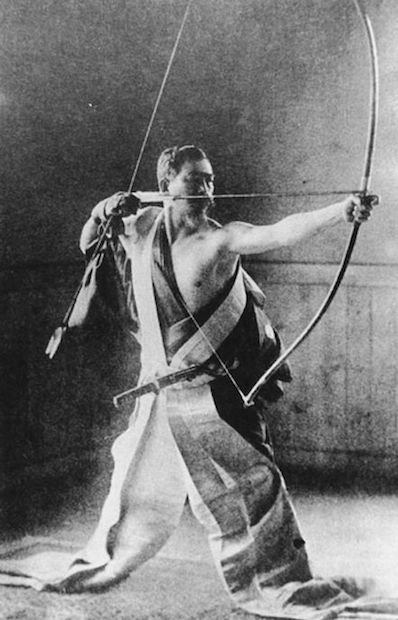 There was once a king of this world. At least, he thought he was a king, because he had all the trappings. No one can live without believing in something. Forty gold swords and forty gold maces were carried before and behind him. Now it was borne in on him, as he was sleeping on his royal couch, that he was sleeping heedlessly. He may have been dreaming of God, but his state was that of a man looking for a camel on the roof. His idiocy found him out. He had no question until the moment his roof vibrated. He heard a voice which reproached him, but did not know from where it came. He had begun to hear with another part. His heart was filled with terror, a fire blazed within him and he could sleep no more.

Day came and he carried on, but not quite as before Although his slaves were drawn up in serried ranks and his ministers stood each in their place, he was bewildered. The same might have happened to any other king, but with no result. So, why me? Why, indeed!

Now two worlds began to coexist in him, not very strongly perhaps, but as much as he could bear and a little more. He became open to strange visitations, and one duly occurred. A man with aweful mien entered the royal chamber and, ignoring all protocol, solemnly tore the king’s security to shreds. In the legend he is called, and indeed was, a messenger from the Unseen. He came through a crack between the two worlds, neither of which we experience directly. Not only did none of the king’s retinue dare ask the stranger’s name, but their tongues clove to their throats in fear. He declared the king was a meaningless ephemeral presence. From this the king understood he had been living in a dream of safety, in which he could no wrong. It was true, but not good. He sensed the inevitability of his own death, the crossing of which threshold of awareness is granted to few in this life. The fire blazed fiercer and his anguish augmented momently, but he struggled to continue as if nothing had happened. He couldn’t help but be in danger.

So Nature, which is not sufficient unto itself but under heaven, turned against him. Which means it became an instrument through which he could be directly addressed and utterly turned. Man has two natures. Woe and joy to know this. The king went hunting, than which he loved nothing better in this life. But the chase blessedly reversed and he himself became the prey. He was beginning to realise it. “I know not what this thing is that has come upon me today,” it is said that he said. “Lord God, how will this affair end?”

Whatever forces attend on such a moment, duly attended upon it. In his bewilderment, he became separated from his troops and suddenly heard a voice: “Awake!” Pretending not to hear he rode on, but the voice sounded twice more, and then a fourth time: “Awake, before you are stricken awake!” At this, he lost all self-control. A deer started up, but turned and announced that it had been sent to hunt him. In a penetrating way it dismissed all that was dear to him. The king cried out in stupefaction, begging for an explanation, avoiding the question. The same words then issued from the pommel of his saddle, and the collar of his cloak. The transaction was completed and the revelation consummated. He dismounted. All his garments, and the horse itself, were dripping with his tears.

The outcome was now assured. All the angelic hosts gazed upon him. Faith took root within and he repented, turned aside from the road, exchanged clothes with a beggar and set out into the unknown, where his story took its course under different laws. It burned itself into the memory. Thirteen hundred years later I read it, and now you. It is a matter not of imitation, but resonance. We hear a call, but do not know from where it comes. His subsequent sayings were written down, but to quote them would invite misunderstanding. They do not apply to us. His sufferings are inconceivable on this bank. Secretum meum mihi I believe that, having altogether turned, his sense of a false upstart self was not abolished, but intensified. We are not speaking of romance here, but of love.

It is said that he encountered the great men of faith who taught him the Name of God by virtue of a process outside time, for they were no longer living by our estimation. In Mecca he announced himself a heretic and was beaten by bigots. He followed the Way of Blame, holding absolutely to the Unity of God and the necessity of self-denial. On his path, hope materialised out of despair. He was one whose prayers were answered. There were miracles of nature submitting to the force of his conscious thought. Having stopped himself absolutely in mid movement, he prevented a man perishing as he fell from a bridge, by shouting for God’s mercy upon him. One bitter winter night he had only to think of fire to behold a fur on the ground. He slept wrapped in a dragon, its eyes saucers of blood. This embrace saved his life. In the morning, it rubbed its face in the ground two or three times before him and vanished. He spent nine years in this fearsome cave, three years in each apartment. Who knows what cave it was and what occupied him there? All this was remembered by others, through channels of aspiration. Of the marvels attending him, he told witnesses that they were the least things: “The rest you know nothing of.” In short, there were surreal events. What we have are tantalising shreds woven into stunning miniatures.

We receive the story somehow. It has the ring of gold on marble. This ibn Adham lived a hundred years after a great saint in whose image he was reformed. The preferred oath of this saint was, “By Him in whose hand my soul is!” The spiritual affluence of times is incomprehensible, because the very air is charged and wasted land becomes an accumulator. Entire populations are stunned for the sake of a great purpose. To accomodate the pressure of newly arising souls. What does it signify whether we call the stranger who initiated the king Khidr or Elijah? Ibn Adham becomes the Christian saint Hubert, whose stag bore a cross between its antlers, for the thread maintains the fabric.

From ancient times we have inherited legends of human conversion. They are extraordinary, because new experience has swiped the known text aside and survived its obliteration. It is different on the other bank of the river. The record has been made as comprehensible as it can be to the reader, but the writer has no longer any idea what he is talking about. Words fascinate, reinforcing what we know, but the Word is creative, and will be heard. Conversion, which means an altogether-turning. Initially, faith is not an issue. I suspect the turning king believed nothing: it was all to prove.

Hagiography is disdained as historically untrue, because it does not deliver the kind of evidence the formatory mind recognises. It speaks to another part, justifying something absolutely not our heedless way of living. There are two streams in the history of humanity. The use made of the golden legends of those individuals who crossed from one stream to the other by religious institutions in order to cement their authority, is highly questionable, and probably despicable. They do it to sustain faith.

Is it not true that, notwithstanding moments of grievous shock, we believe in whatever happens to capture our attention, until it is superceded by the next thing, and that it is just this succession of childish experiencings flowing through us on one level only, tickling our passivity, that make up and sustain our lives, giving us neither the time nor the possibility to see and feel reality? To ascend, one must first descend. The experience of our sleep is crucial. Faith is “the evidence of things not seen.” We must be shriven. That would be an objective economy.

The indescribable experience, which all desire and deny, replacing language, hollowing it out, so that it verges on idiocy, tending to poetry, inducing leaps in the dark. The irruption of the great world into a hovel. Afterwards, it can be heard and spoken, all associations purged. Even then, it is amazing. Afterwards, a culture builds on the ruins, but the plight of the unwitting seeker is its bedrock. The imitative posturing of the presumed self-conscious is a subsequent problem.

Today, tightening one’s belt and spitting into the wind, it could be said that in his case omnipresent consciousness entered his body and blew it asunder, that we should be reformed. He was our brother? Traditional conclusions, East and West, sacred and profane, are impeccable. ‘Thus and so, but Allah knows all.’ ‘In the Name of the Father, the Son and the Holy Ghost.’ ‘If you want any more you must sing it yourself. ‘

Why does it touch us? The legend describes something happening properly, not a broken octave, but a completed action with durable results on every level, in saecula saeculorom. Nature will obey God, conform to higher laws, if humanity awakens. We have two natures and are called to dwell consciously between them. Until it is given us to realise that we sleep, this is impossible.

How to understand this sleight of hand? Nothing is more suspicious than our idea of ourselves, and nothing more salutory than what is. It seems that we must be poked between the eyes with a beam. A mote won’t do it. One mystery is in the predisposition, another in the response. The life of humanity burgeons when they cross.

Though far off, we did not cease to think of Thee. Remember who you are – sons and daughters of the Most High.

Only he who has succeeded by persistent and conscious efforts in freeing himself from the chaos resulting from his own lack of consciousness can be aware of what Religion really means.

iii The Word thought by a man of being is efficacious. See Henri Corbin, Ismaili Initiation, or Esotericism and the Word (Pembridge Design Studio, London 1981) p 53, on pronouncing ‘fire.’