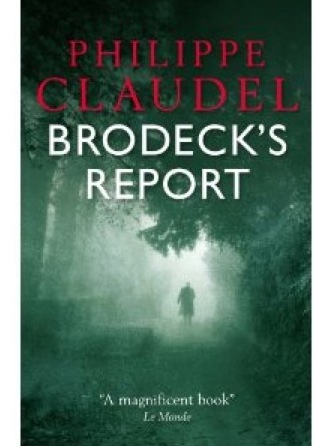 Most of the action takes place in a village in a region where the people speak a dialect of German, but streets are rues and squares are places, and a visitor is greeted as Monsieur. Are we in Alsace? Across the frontier, which is said to be to the east, is a nation where they also speak a sort of German- although the words French, German, Alsace, France and Germany never occur. The regional administrative capital is written as S….. (Strasbourg/Strassburg?). So far, it seems to fit. But at one point the village decide that at least one person in the village ought to have a proper education, and choose Brodreck, the central character of the story. He goes to the capital of the neighbouring country to the east…. which seems strange because the story seems to start before the second world war, almost 300 years after the annexation of Alsace by France (except for a 50 year interregnum as part of Germany), and by then the natives had finally learnt French. Surely this student would have gone to Strasbourg, or even to Paris, rather then to Berlin? But it doesn’t fit anyway because the air of that capital city is described a very polluted, and Berlin is famed for fresh breezes which give the city its famous clean and invigorating atmosphere.

During Brodeck’s studies a violent revolution breaks out and persecutions begin (Nazism?), he flees and returns home. Soon, a war starts, the invaders come from that country the east, and after a while, round up people of “impure blood”. We discover that Brodeck is a Jew, although that word also is never used. He is sent to a concentration camp, and there is a detailed description of the appalling way he is treated. He survives, and after the war returns to the village, and it is gradually revealed that, with the sole exception of the deported Jews, all collaborated with the invaders. . One day a mysterious visitor arrives- from the east. Why did he come? What is he doing? What is he writing in his notebook? Eventually he invites everyone to an exhibition of his drawings and paintings, landscapes and portraits of some of the leading figures in the village. It appears that he has extraordinary insight, for he reveals them as they are- these portraits seemed to be alive. The effect is disconcerting and profound. The villagers ask him to leave, but he stays. They kill his two animals- a horse and a donkey.

Is this visitor a wise man? Why does he do nothing to allay suspicions? He never reveals his name, where he came from or why he came….He does not leave. After the death of the animals he goes round the village, one hour after sunset, evening after evening, crying in front of each house in a high-pitched voice: “Murderers, Murderers!” Eventually, the villagers murder him. None of the villagers are portrayed sympathetically, except Brodeck himself.

The author is much too young to ever have been an inmate of a concentration camp. Whether the details of Brodeck’s humiliation are based on actual accounts, I do not know, but I feel that, for someone who has not been through such a horror, to venture to give an account of what the experience was like to live through to be actually repellent.

As the years have passed we have learned, what initially was suppressed, that collaboration of the French with the Nazis, not only passive but also active, was very widespread. A novel clearly set in a recognisable part of France might have proved quite unacceptable…. Is this book an attempt to present those events in a “universal” setting, that is to say, that could have happened anywhere? Then, why all that about the German dialect…. It immediately will arouse strong negative reactions in French (and many other) readers.

I was left with a nasty taste in my mouth, feeling that my feelings had been manipulated. And all the more disappointing as Philippe Claudel has written and directed a fine film (I have loved you so long), the only reason I read the book.