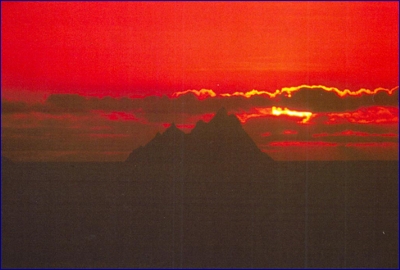 What they undertook to do
they brought to pass;

Out in the North Atlantic Ocean, some thirteen kilometres off the West coast of the Iveragh Peninsula, there is an island that rises sheer up from deep water. It is a lonesome, hauntingly beautiful place and the westernmost site along an alignment (sometimes called the Apollo/St Michael axis) of pilgrimage places running from the range of Mt. Carmel in Israel and Palestine and include Delos, Delphi (Greece), Mont’ Sant Angelo, Sacra di San Michele (Italy), Mont St Michel (France), and Mont St Michael (England).

The first reference to the Island of Skellig Michael (Sceilig Mhichíl in the Gaelic language, meaning “Michael’s rock”) was made in an early mythological cycle when it was mentioned in an encounter between the Milesians and the Tuatha de Danann. Later it was associated with the Celtic trickster-god Manannán (from whom the Isle of Man derives its name). Towards the end of the first millennium of the Christian era the rock was dedicated to the Archangel Michael, one of the archangelic quaternary. Around 650 AD, a monastery was built there. 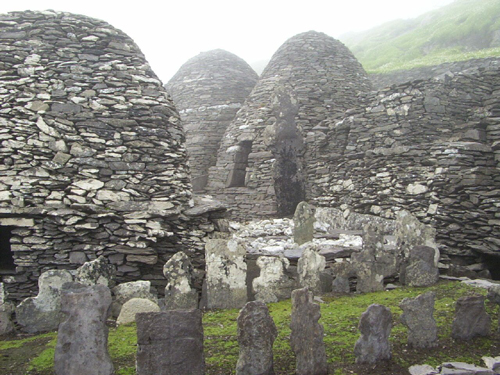 Nearly 215 metres above the surface of the ocean on narrow craggy ledges, is the Skellig Hermitage. Legend ascribes the founding of the monastery to St. Fionan. In The Road Wet, The Wind Close, James Charles Roy states, “The monastery of Skellig Michael is a Celtic diorama — the Angkor Wat of early Christian Ireland.”

During the ninth and tenth centuries Skellig was raided and plundered by Viking marauders. In 823 AD it is recorded that the then Abbot Eitgall was taken from the monastery by Vikings and starved to death while his fellow monks were killed in their sanctuary. In spite of such shocks and brutalities the monastery endured. It is reported by Geraldus Cambrensis that at the end of the 12th century the community moved to Ballinskelligs on the mainland. However there are ecclesiastical records, which reveal that the monastery remained occupied until the 14th century.

During some unknown early period Skellig became a place of hardy public pilgrimage and remained so until the latter decades of the 20th century. The pilgrims came from Ireland and Europe to visit not the monastery but to pray along a path of upward leading stations that culminated at a precarious stone slab overhanging the sea near an isolated hermitage known as the Needle’s Eye. 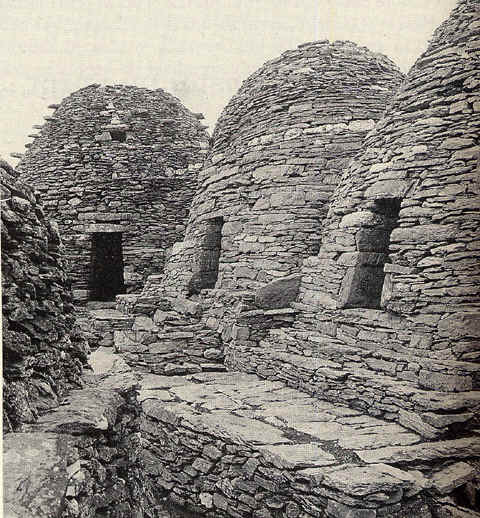 “The hermitages and monasteries of Greece and Egypt are often considered the ne plus ultra of Christian monastic withdrawal.” However, Skellig stands on a pinnacle, an edge more awesome and austere than Meteora. To stand there alone on cloud-strewn weather-hinged days, one can sense a terrible simplicity of inner search that had been scraped down to bare rock. That form of rock itself was, for those who could endure it, in its turn broken, to allow the archetypal currents to flow down and upwards in harmonic scale of all and nothing, beginning and ending. In that moment where there is no moment, opening and being opened to receive divine help bestowed upon those who had attained responsible maturity.

Below the cells and oratories of corbel stone lay the deposited remains of marine algae that had been laboriously carried up from the waters below. Here there had been a small garden which provided nourishment for those few who came to this “rim of the world” to face their isolated, lowly selves and thereby sought a way of being that might correspond with a way of being with those who are above. 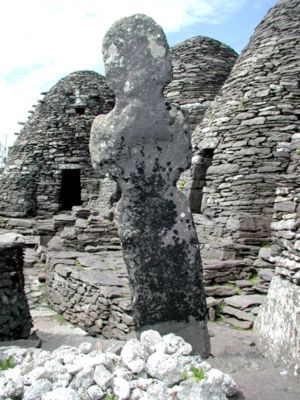 I first saw Skellig Michael around 1959 but it was not until 1983 that I set foot upon the island and for this relatively long wait I was subsequently grateful, for by then I was somewhat prepared to be open to the wonder of simplicity. Of all the many ancient and monastic sites that I have had the privilege to visit throughout mainland Europe and the British Isles, Skellig has left the deepest impression upon me. It bears such a breath of presence and there maybe too a hint of a great, dangerous and delicate journey, the direction of which is offered to us from an early Irish poem…..

No weakling could follow
The pathways they followed;
Before they were hallowed
All evil they swallowed. 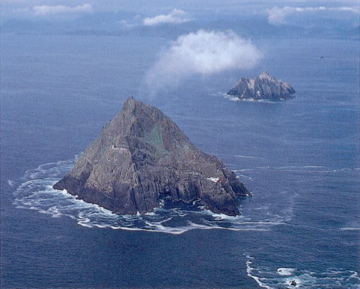