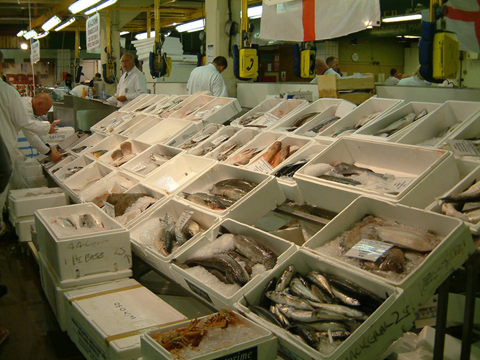 It was a real struggle to get out of bed at four in the morning that day. I had agreed to meet some friends at Billingsgate Fish Market to buy some fresh sea bass. The journey into London by car was mercifully traffic-free, and it was strange to find the great wide streets of central London, usually thronging with people, so quiet and expectant. We met in the market car park, and were greeted by a nondescript low modern building, which replaced the old market building (now listed) in 1982.

There was no particular expectation on what we would find, but on walking through the entrance, what a shock for the senses awaited! A tidal wave of sights, sounds, and smells washed over us – making me forget my tiredness. Firstly the sights – a whole swordfish lying in state, huge containers of every type of fish imaginable – from sardines to tuna gleaming freshly in their iced sarcophagi, and live lobsters and crabs vainly trying to escape their fate. The sounds were from the people who had been working most of the night – shouting, haggling on prices, and the fish boxes being moved. There was an unmistakeable smell of the sea pervading the place, mixed with the contrasting aroma of freshly made coffee.

We negotiated a ridiculously cheap price for ten beautiful large sea bass, loaded the car up and drove away. Billingsgate is the most animated place I’ve found in London for conveying a real sense of life and it made me appreciate how hard people have to work to provide our food. The people there seemed very much more alive than those who don’t have a physically demanding job.