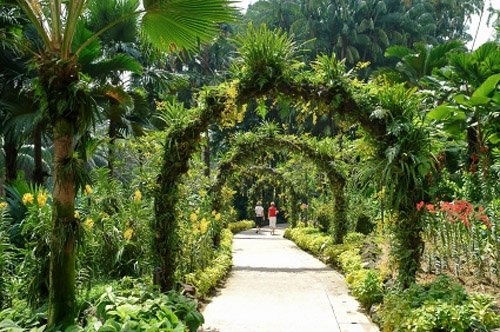 Whilst I was glad to leave behind the over-crowded chaos of Heathrow Terminal 3 on a cold December’s night, there were a number of doubts about the wisdom of undertaking such a long journey just before Christmas for 2 days in Singapore and 3 days in Kuala Lumpur. However, for business reasons the journey had to be made.

First of all there was the physical shock of the tropical heat and humidity on arrival at Singapore airport. Then there was the impression of a dynamic, over-crowded city where the shortage of land has resulted in huge numbers of high-rise blocks of flats. My hotel was on Orchard Road, the main shopping thoroughfare in Singapore. After the long flight (close to 13 hours), and a recuperative meal, I walked along Orchard Road for a short time, taking in the immaculately clean shops with their shiny luxury items on display, and the impromptu Abba karaoke parties and street performers attracting large numbers of happy onlookers. That night I could hear in the distance the sound of a massive beach party (called Zouk Out) for up to 30,000 young revellers.

Was Singapore just a large shopping centre? Thankfully, no. I managed to find the indescribably beautiful Botanic Gardens after a 20 minute walk through the treacley hot air. There are hundreds of different tropical trees there, and a number of themed gardens, including the National Orchid Garden, with over 2,000 varieties of orchids, including the national flower of Singapore, the Varda Miss Joaquin. Throughout most of the park one can either see or hear water, with numerous lakes, waterfalls and streams close to the main paths. The effect was to create an intense desire to stop, rest and reflect.

My visit to the Raffles Hotel in the same evening provoked different impressions. With all its British colonial associations, it was strange to find out that it was founded by two Armenian exiles in the 19th Century. The hotel has recently been subjected to a lavish restoration, and its pillars and courtyards gleamed incongruously white against the backdrop of skyscrapers. Outside – a collection of lovingly restored classic British cars gave away the patronage of the hotel. I drank my Singapore Sling quickly, uncomfortable in the ostentatious surroundings.

The time in Kuala Lumpur was largely spent working, with little time to explore the vast, pulsating city. The mixture of cultures there is fascinating – Indian, Malay and Chinese, with strong Budhist, Christian and Islamic influences. I was struck by the warmth and humour of the people I came across, and their drive to get things done. The levels of attentiveness to service at the hotel where I was staying were embarrassingly high, but I noticed the way in which some of the staff held their hand over their heart when greeting guests. One had the distinct impression this was a sincere gesture, and not merely imitation. It was clear how the expression “tiger economy” could apply to both Singapore and Malaysia. Some of the buildings in both cities express a conviction in modern technology and showmanship that is overwhelming in its scale, and not dissimilar to many large American cities. One example of this is the Marina Bay Sands Hotel in Singapore, consisting of three 55 storey high skyscrapers, joined at the top by an immense concrete replica of an ocean liner, with a rooftop swimming pool.

I was left with a question at the end of my short stay, as I heard a Lady Gaga song playing in Kuala Lumpur airport. What will be the result of the spread of western style materialism and how can this be reconciled with the religious traditions prevalent here such as Islam? 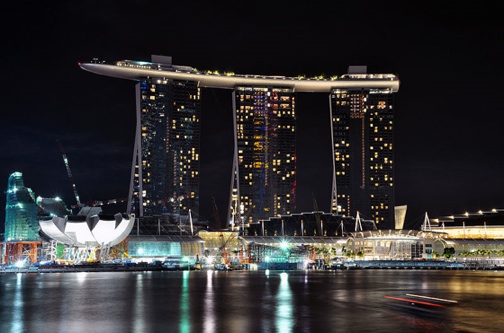