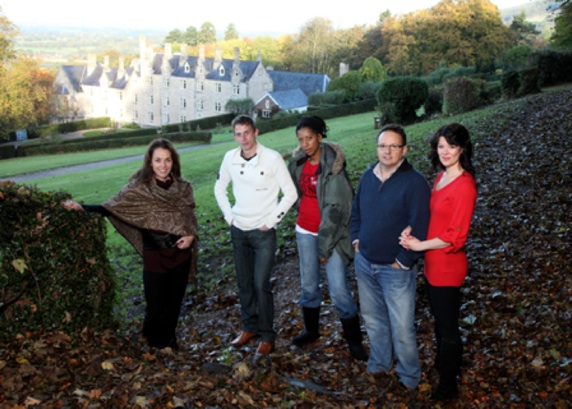 The Big Silence, was a three part series shown on BBC2 television in 2010. It followed an experiment by a Benedictine monk, Christopher Jamison, to explore whether the search for inner silence could be introduced into peoples’ lives. The unfolding experience of five “volunteers” at an eight day silent retreat was uplifting and moving. The experience had a very strong and positive effect on all of them. In the case of one man the result was, as we say, life-changing.

Speaking as a viewer, the programmes brought a sense of silence to me also. Grass awaiting imminent rain. I have spoken to other people and they had a similar experience. We might ask where does this endeavour, this searching for silence, come from? I do not mean where does the experience come from, but where did the practice originate? Did something of this kind originate in England?

In our times, we have become accustomed to associating silence and meditation with foreign parts and people: Zen Buddhism, Yoga, Hindu mantras, Tibetan Lamas, Taoist alchemical methods, Sufi poetry… But what about England? Did we and do we have such a tradition of cultivating silence and its attendant experiences? Has it not been in existence for at least seven hundred years, if not longer? It seems likely that the answer is yes. If so, then why didn’t the practice emerge into what we call the public domain along with the others?

Fortunately for my busy brain I am not obliged to answer those questions just now! (I have an answer but it would require another article.) The Big Silence reminded me of a book which I read in byegone days called The Cloud Of Unknowing. This is an English Christian work written some seven hundred years ago. It is anonymous. It may well have been the work of a senior monk, or an abbot, deeply experienced in the inner search for God. To quote Wikipedia:

The book counsels a young student not to seek God through knowledge but through what the author speaks of as a “naked intent” and a “blind love.” This is brought about by putting all thoughts, except the love of God, under a “cloud of forgetting” and thereby piercing God’s cloud of unknowing, with a “dart of longing love” from the heart. This form of contemplation is not directed by the intellect, but involves spiritual union with God through the heart.

Over the centuries it has inspired and helped many Christians, some of them well known for their own teaching and writing:Meister Eckhart for instance.

I went back to have a look at this book, after several decades of no contact with it, and in the process discovered yet another book, The Book of Privy Counselling, which is regarded as a kind of sequel to the first book, in which, the author characterizes the practice of contemplative unknowing as worshipping God with one’s “substance,” coming to rest in a “naked blind feeling of being,” and ultimately finding thereby that God is one’s being.

Reading passages from both books I was struck by the affirmation that words and emotions and ideas and rituals might be set aside, as it were, in favour of an actual substantial contact with the Almighty, or at least contact with a level of being closer to the Almighty. The experience coming from The Big Silence pointed the way in such a direction. The silence to me, and to others, was substantial: not simply a mood or a feeling, but a change in the chemistry, one might say, of one’s being, at least for a time. In the case of the man whose experience was life-changing it was perfectly clear that he was a changed, a different man from the one who had first appeared in the series.

In case someone might be thinking that I am contradicting myself by referring to a book in the light of the above paragraph, I have to say that this apparent contradiction: words and no-words, idea and substance, does not escape me. But the fact of experience says that words, spoken, sung or read, can affect substance. The point here surely is not to mistake the one for the other.

Taking passages from The Book of Privy Counselling, we read:

There is no name, no experience, and no insight so akin to the everlastingness of God than what you can possess, perceive, and actually experience in the blind loving awareness of this word: is. Describe him as you will: good, fair Lord, sweet, merciful, righteous, wise, all-knowing, strong one, almighty; as knowledge, wisdom, might, strength, love, or charity, and you will find them all hidden and contained in this little word, is.

One can be forgiven for drawing back from passages such as this. “Is?” “Is. is, is…?” Nothing happens? Just “Is”? But there I go, thinking again! Grass awaiting imminent rain…