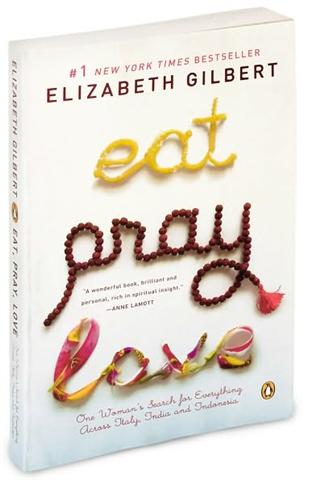 One Woman’s Search for Everything Across Italy, India and Indonesia” by Elizabeth Gilbert. Viking Adult, New York, 2006.

An American romance? For me? Yet my friend, so very different from myself, sometimes goes just straight to the point. That was it, I needed that book and I was at the same time ashamed and very happy reading it, sometimes touched, crying and smiling at the same time. My friend said, “This is not a book that any man can understand, or any young woman who hasn’t gone through a lot in her life” which was perfectly right. Because there are in this book such wonderful fragments regarding inner (mainly spiritual) experiences that one almost feels awe, at the same time wondering how, after reaching such depth, it is possible to express in the next few words something so trivial, hilarious, or silly… Real inner experience should just be high and serious, shouldn’t it? Or at least the humour should be very sophisticated? Not so… American! (Do I have any national prejudices about humour?)

Another friend of mine who met the author for a TV interview said that she had confirmed all that she had written, and was still happy. I would wish everyone could have an inner experience such as she describes, the depth and completeness of it- though of course it would be different for each one of us, understanding arising slowly and embracing one part of the narrator after another. The story is of an American writer, a woman aged thirty-five (but feeling older of course) after a painful divorce, depression and a love affair, traveling through Italy, India and Indonesia. Each country with its own reality and everyday miracles serves as a mirror for another aspect of the author. What is strange is that her deepest experiences seem in a way rather light. On the way to reaching/touching her Self, all seems so light and colourful, positive, even funny, and yet it’s not on the surface at all… which surprised me (do I take everything too seriously?). One can feel that she truly, sincerely and devotedly tried to go on a journey such as all true seekers try.. I’m not sure just where it took her, inside, but can see deep wisdom which allowed her to write about it in such a light-hearted (though intelligent) way. (It’s now a film, but that has not been well received).

My favourite fragments are about a very old shaman she meets in Bali (who says to her, when she thanks him because on account of him she returned there two years later: “But you were always coming back to Bali”). One day he tells her in his strange “Bali English”, stories about his inner experience of going seven levels up and seven levels down, saying that “Heaven” and “Hell” look exactly the same and are…… Are what? One must read the book to know- well, perhaps much more is needed- not just “to know”, but to live it.