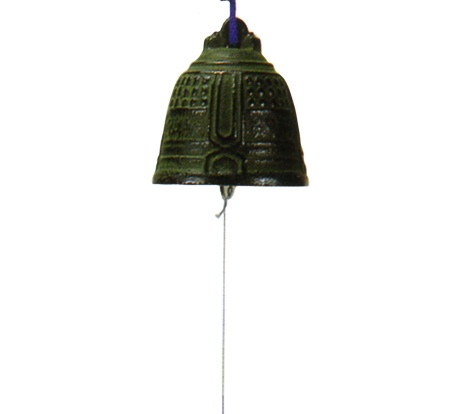 At the sound of a bell

Among the tasks or “yogi jobs” a participant can volunteer for during silent retreats at the Insight Meditation Society, a major Buddhist center in rural Massachusetts, the most resonant in every sense is the role of bell ringer. Before dawn and before every meditation session during the day, the bell ringers walk through the halls of a rambling brick building that was once a Jesuit seminary, striking a bronze bell that is held suspended by a thick strap. I remember being curled in bed in the dark in a solitary cell of a room, hearing it resonate deep and low in the distance, cutting through my dreams like a fog horn. As the “awakener” progresses on his or her appointed rounds, layer upon layer of reverberations build up. He or she literally strikes a chord that touches the heart—at least this heart–filling one with a longing to be part of a greater life, a life that you feel sure was lived by other beings in other times.

When I hear the sound of bells like the one at that meditation center, I remember that the great Zen master Dogen taught that spiritual practice is a circle. When we turn away from the pull of our ordinary habits, seeking the vibrant silence under the words, we join all the great beings from all times who came to show us the way. I remember the contemporary Vietnamese Zen master Thich Nhat Hahn striking an enormous bowl-shaped bell, saying “Listen to the sound of the bell calling you to your true home.”

Yet I have never gone away on a retreat expecting to feel a sense of communion with others—even others from distant places and times; it always comes as a surprise. I usually go with the resolve to be self-sufficient, thinking of that great American yogi, Henry David Thoreau*, who lived alone for several years in a tiny cabin at the edge of Walden Pond:

“I went to the woods because I wished to live deliberately, to front only the essential facts of life, and see if I could not learn what it had to teach, and not, when I came to die, discover that I had not lived. I did not wish to live what was not life, living is so dear; nor did I wish to practice resignation, unless it was quite necessary”.

I do not wish to live what is not life. Sometimes one can start to feel like a ghost, haunting the world instead of really living in it. Riding down to Manhattan on the train or in the midst of a meeting, trying to make a point, I can suddenly have the impression that whoever is bustling down to the city or talking has no real substance or force, as if I am just a hum of thought, a stream of images and memories, a vaporous, shifting dream.

I have sometimes speculated that people from different cultures and nations might have different ways of approaching spiritual practice. At least I have a bent towards American rugged individualism. Like Thoreau, I want to be self-sufficient and to pare down life to the essentials: “I wanted to live deep and suck out all the marrow of life, to live so sturdily and Spartan-like as to put to rout all that was not life, to cut a broad swath and shave close, to drive life into a corner, and reduce it to its lowest terms, and, if it proved to be mean, why then to get the whole and genuine meanness of it, and publish its meanness to the world; or if it were sublime, to know it by experience, and be able to give a true account of it in my next excursion”.

Yet, there inevitably comes a moment when I find myself sitting with in a shadowy hall somewhere, early in the morning or in the evening. Wrapped in shawls and blankets, sitting still with backs straight, we look like the earliest humans, I realize. At least in this essential sense: we seek to know life with our whole beings. I feel a sense of communion with the others, all of us coming so far to be together, away from habit—and not just New York and California but through all kinds of difficulties. And all of that common effort made just to risk knowing what it might be like to be completely aware in the moment–to have an attention that isn’t attached to memories and feelings and views, that isn’t separate from life by being attached to being a “someone”.

Almost anything can become habit, the morning rounds with the bell, the walk to pond to bathe – everything except the search for a greater awareness, a greater openness to the mystery that surrounds us. There usually comes a moment when I am sitting in a room full of fellow humans, all of us drawing our attention to the essential fact of life, of being in a body, breathing. Returning to the body in such a moment can feel like descending into a vast subterranean cave full of forces and energies unknown to the ordinary thinking mind.

In such a moment I begin to grasp something that the spiritual teacher Gurdjieff taught, that we and our ancestors all the way back to the beginning of humanity are one. They exist in us. I realize why the aborigines call white people the “line people”, because we think time is linear. They know it is closer to reality to think in cycles: day and night, the heartbeat, the breathing. They know that the ancestors live on in us, and that now it is my turn to try.

When I go on a retreat (even if it is just a moment of turning inward during the day) I see that my own attention was weak, just a kind of dim, flickering light, but I realize that as weak as it is, it is probably also the strongest force in me. It is my own life force. When I remember I feel certain that if I just keep following it, leaving the known world of my thinking for the unknown, I will come upon wonders. And then I am lost, and then comes the sound of the bell.

*The reference is to to Walden, by Henry David Thoreau. He lived alone for many years by Walden pond in Massachusetts in the nineteenth century. Thoreau is greatly respected to this day in the United States, and the book still widely read there and loved.