My search for meaning, in the midst of meaninglessness, was suddenly given direction as the result of an event that occurred just as I started reading the Russian writers of the 19th century. I was sixteen years old at the time. I came home from boarding school for the Easter holidays that year to discover that our house had been sold, and that my parents had split up. My mother had moved into a hotel with my brothers and sisters. Her business was on the verge of collapse. My father’s business continued to thrive, but my school fees had not been paid, and there were outstanding bills for clothes and books.

Throughout that holiday, in that hotel, every day, I continued to read Dostoyevsky’s ‘Crime and Punishment’. I felt nothing whatsoever, not because I was heartless, but because I was in shock, and automatic suppression of feelings had isolated me from what was going on. On the way back to school, I got off the train two stops from the end. I went to the house of an aunt of mine, borrowed some money, and took the boat train to London. I was going to start a new life.

However, without qualifications, underage, and with no money, that new life almost started on a building site. Instead, I went to work for what came to be called ‘Murphy’s Fusiliers’, the huge gangs of Irish workmen who dug miles of trenches and deep tunnels out in Hounslow. It was brutally hard work, but well paid, and I took it as a challenge.

With my first pay packet, I bought several paperback versions of the Russian classics, in a little bookshop I had discovered in Central London. The owner, a Mr. Watkins, advised me in everything, and very soon I had read Pushkin, Lermontov, Turgenev, Gogol, Gorky, Checkov, and others. In the film, ‘Shadowlands’ – which is about an episode in the life of the writer, C.S.Lewis – one of the characters says ‘We read to know that we are not alone’. That succinctly describes my situation at the time. My constant ‘search’ had made me feel alone. Here at last, on the pages of these Russian novels, I met characters I could immediately identify with. They agonised, they searched for the meaning of life. Sometimes they did terrible things, but always because they were seeking the ‘truth’ about themselves.

In Lermontov’s novel, ‘A Hero of Our Time’, I immediately recognised the thoughts and feelings of the protagonist, Pechorin. In Dostoyevsky’s ‘Crime and Punishment’, I was struck by the parallels between my life, inner and outer, and that of the student Raskolnikov. Both of us were desperate, penniless, and full of questions.

One day, the bookshop owner, Mr. Watkins, suggested that I read Tolstoy’s ‘Anna Karenina’, because it was considered to be the greatest novel ever written. In that novel, in the character of Levin, I immediately recognised myself, or at least, important aspects of myself. I was fascinated to learn that, in creating Levin, Tolstoy was really writing about himself. That puzzled me, because the outer, successful Tolstoy seemed so different from the man he revealed in this novel. I felt that I had to read about his life. So, my very next purchase in that bookshop was a biography of Count Leon Tolstoy.

As a result of reading that biography, I began to realise that talent had nothing to do with character. It became clear also that there are two sides to a man, which, for some reason, were at odds with each other.

I started reading biographies of other writers, then went on to read about the lives of composers, artists, and successful men in every field. In every case, this dichotomy was clearly visible. In each case, one side seemed to be hidden, unknown, sometimes not even suspected by the man himself. What did it mean? This question stayed with me for years.

But for the moment, I turned again to Dostoyevsky, and read ‘The Brothers Karamazov’. Here I discovered something else. Each of the brothers in the novel represented a man in whom the head, feelings, or body, were the principal driving forces. I felt certain that Dostoyevsky had stumbled on something very important. I read the novel several times before disillusionment began to set in. Dostoyevsky, I concluded, was fishing in muddy waters. He did not have any answers.

It was not answers, however, that invested my search with meaning. It was the condition of being in question that made me, and makes me still, feel more alive.

You can find out more about Geoffrey Watkins, the history of Watkins Books and it’s influence in the 60s. It is now under new ownership. 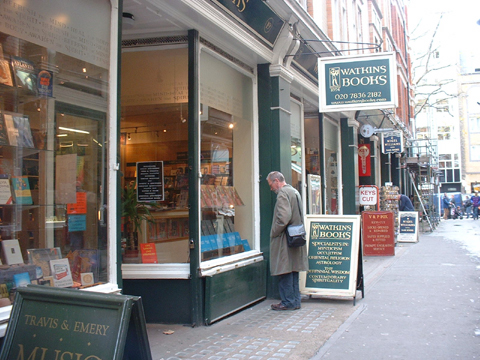