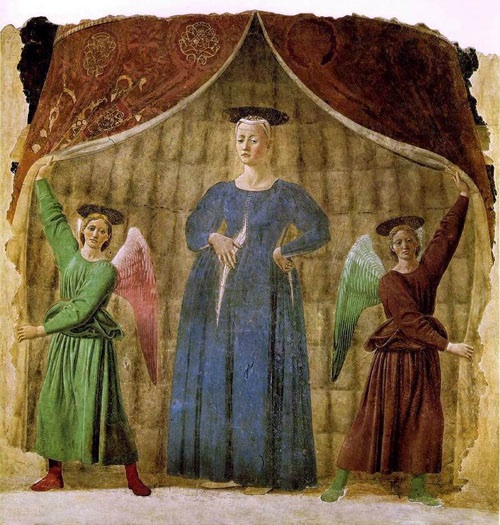 The Madonna’s hand rests on the curve of her belly
as she stands, gowned in heavy, blue brocade.
Beneath the halo, her face looks weary, vulnerable:
An extraordinary woman caught in an ordinary moment;
she’s tired, and her back aches. See how the painter shows her hand
pressed into the curve of her spine, as she stands and stretches.
Ah, but you know what it’s like, now.

She has been sewing too long; setting each stitch carefully,
choosing the colours, building a picture
stitch by stitch, umber and olive green and ochre
buff and tawny; the winter landscape, that tree, its branches
slender and bare, yet burnished with fruit:
in impossible season bearing.

Those moments when she pauses, looks out of the window
or stands, as now to stretch her body,
those moments are so full. What does she see?
Not the valley, the hills framing the view.

Moments caught between past and future,
having a needle sharpness, set against the earthen landscape.
Now, here, suspended in time, before
and after, everything that we know: the story
too familiar to be real. Now, she is just a woman
tired with waiting, whose back aches.

In response to ‘Madonna Del Parto’ by Piero della Francesca