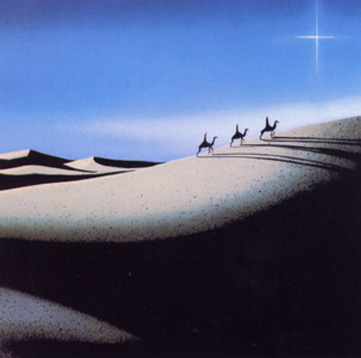 Journey of the Magi by T.S. Eliot (see below) has been one of my favourite poems since I first read it as a teenager. It provided a diametrically opposite, and for me shocking view of the Nativity. There is the suggestion of an intense inner struggle within the Magi traveling to see the new born Christ child and the clear implication that the journey wrought in them an inner wisdom. The generally accepted notion from the Christmas story in the West is that the three wise men coming to Bethlehem symbolised the bringing of wisdom from the East.

The Journey of the Magi describes the difficulties of an arduous physical journey but also provides oblique references to a parallel journey – an individual’s journey towards spiritual truth. The poem raises fundamental questions. What kind of Birth and Death is alluded to here? Does it refer only to the birth of Jesus, or is it an allegory of a possible rebirth in a man, a reunion of all his spiritualized parts, a dying to this world? The question burnt in me.

Throughout history there have been myths and legends of journeys that were undertaken by a single character or group of travellers which resulted in profound changes. Pilgrimage – the undertaking of a physically demanding journey to fulfill a sacred purpose, is a well known concept which appears to be enjoying a renaissance. The number of people walking or cycling the pilgrim’s route to Santiago Del Compostella has increased significantly over the last 30 years. Similarly, the number of participants in the great annual Haj to Mecca increases every year.

Several years ago I walked with three other friends along the North Downs Way from South London to Canterbury over Easter, a distance of roughly 100 miles. This is a short journey compared with the great pilgrim trails in France and Spain, but was still demanding. We all suffered physical difficulties of various kinds. There was a real sense of collectively overcoming a general resistance to effort (how strong at times was the inner voice in each of us saying that we should go home). Although our route never strayed far from busy roads and towns, the rhythm of walking for long periods helped us to notice the relics of an ancient landscape – medieval palaces and villages, all built on this long distance path which has been used since the Stone Age. The continuous effort of walking also helped to “let go” of day to day troubles. Perhaps the pilgrim fathers understood this – that the physical journey was a means to an end – to bring together man’s inner parts so they could work more harmoniously. A substantial physical effort certainly appears to help this process, through making the large muscles of the body relax. And then the real journey, the inner search, has the possibility of beginning again.

Journey of the Magi

‘A cold coming we had of it,
Just the worst time of the year
For a journey, and such a long journey:
The ways deep and the weather sharp,
The very dead of winter.
And the camels galled, sore-footed, refractory,
Lying down in the melting snow.
There were times we regretted
The summer palaces on slopes, the terraces,
And the silken girls bringing sherbet.
Then the camel men cursing and grumbling
And running away, and wanting their liquor and women,
And the night-fires going out, and the lack of shelters,
And the cities hostile and the towns unfriendly
And the villages dirty and charging high prices:
A hard time we had of it.
At the end we preferred to travel all night,
Sleeping in snatches,
With the voices singing in our ears, saying
That this was all folly.

Then at dawn we came down to a temperate valley,
Wet, below the snow line, smelling of vegetation,
With a running stream and a water-mill beating the darkness,
And three trees on the low sky,
And an old white horse galloped away in the meadow.
Then we came to a tavern with vine-leaves over the lintel,
Six hands at an open door dicing for pieces of silver,
And feet kicking the empty wine-skins.
But there was no information, and so continued
And arrived at evening, not a moment too soon
Finding the place; it was (you may say) satisfactory.

All this was a long time ago, I remember,
And I would do it again, but set down
This set down
This: were we led all that way for
Birth or Death? There was a Birth, certainly,
We had evidence and no doubt. I had seen birth and death,
But had thought they were different; this Birth was
Hard and bitter agony for us, like Death, our death.
We returned to our places, these Kingdoms,
But no longer at ease here, in the old dispensation,
With an alien people clutching their gods.
I should be glad of another death.’