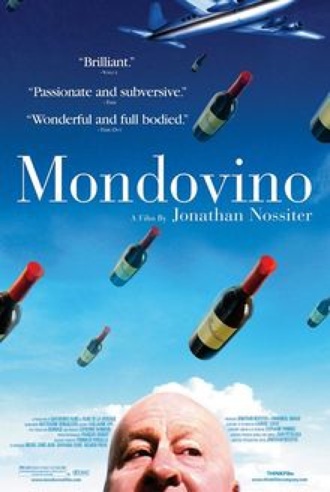 This documentary film by Jonathan Nossiter, is now available on DVD.

How is the era of the Kali Yuga* affecting the wine industry? Traditionally, wine was made mostly by small growers – small in the sense that they owned a few hectares each, although there have long been some quite large estates in Bordeaux. These growers were proud of their local grape varieties, their terroir- a French expression for the particular combination of soil, aspect (in relation to the sun), climate and varieties that gave their parcel of land its special characteristic. Now, scientifically trained experts, oenologists, are advising growers how to make “better” wines. Most famous amongst them is Michel Rolland, himself born in the Pomerol, part of the Bordeaux wine region where, principally, the Merlot grape is grown. He is a flying wine-maker, advising on the making of wine in eight different countries, and by now, exerting a huge influence.

This documentary film, which is entirely without commentary, begins with the victory of a village of small growers against the attempt by a huge global wine company based in California- Mondovino (the name of the company makes their ambitions clear)- advised by Rolland, to level some gentle hills in the Languedoc to create a large flat vineyard to make supermarket wine. They elect a communist mayor who rejects the scheme. Rolland denounces the decision as being one made by backward, ignorant peasants. Mondovino learn their lesson, and decide that the key to expansion in Europe is to team up with locals. In Tuscany they choose a wealthy, aristocratic family, the Frescobaldi, and set up a large joint venture. Meanwhile, back home in California, they have joined forces with the Rothschilds, who have a very large estate in Bordeaux and produce fine wine but also, increasingly, mass wine for the supermarkets, to make something called “Opus One”, dreamt up by their marketing department, whose manufacture is overseen by…. yes, Michel Rolland.

An American wine writer, Robert Parker, who undoubtedly has a very fine sense of taste and smell (his nose is insured for a million dollars), wields immense influence on the trade. If he recommends a wine, it sells; if not, it does not. This does not matter to very small producers, but obviously, the livelihood of the more substantial producers depends on his judgement. As it happens, he and Michel Rolland like the same kind of red Bordeaux- dark, oaked, early maturing. It is now the kind of wine made everywhere, especially California and Australia.

Remarkably, the makers of the film do not comment. There are interviews with the directors of Mondovino, many shots of Michel Rolland at work (on his mobile in his chauffeur-driven car, telling growers what to do), with Robert Parker, with the Frescobaldi family, with small growers in France, on location on their estates. The film does not cover all the changes that have taken place- for example, the fact that a few grape varieties are now grown everywhere, that wine is now usually filtered, the use of oak chips to colour and flavour cheaper wines, fermentation in steel, glass or concrete….and the power of the supermarkets is barely mentioned. Quantity reigns….