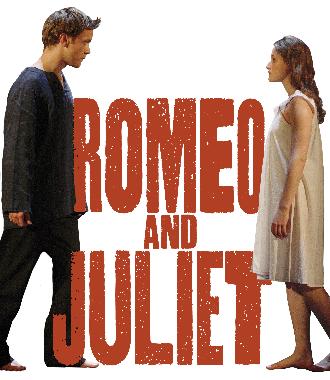 Unexpectedly and at short notice (which is the best way to do many things), a friend invited me to see “Romeo and Juliet” performed by members of the Royal Shakespeare Company at the Park Avenue Armory, on the Upper East Side of Manhattan.  From the moment  I filed into the cavernous Drill Hall, I felt I was participating–not just passively observing but actively engaging–in something very special.   I climbed winding stairs to a tier overlooking a stage in a replica of its main theatre in Stratford-Upon-Avon– shipped from England in 46 shipping containers (“Millimeter for millimeter, it’s pretty much the same as what we’ve built in Stratford,” Michael Boyd, artistic director of the RSC, told a New York journalist).  Surrounded by beautifully dressed people (one young woman nearby wore a dress that seemed to be made of silken white petals and sky-high white heels) I witnessed a drama that was more than a spectacle in space:  what unfolded was an event that reminded me that human lives can contain moments of “timeless time.“

The Yale professor and author Harold Bloom teaches that there is no greater portrait in Western literature of a woman in love than Juliet.   Her constant generosity is a model of the utmost capacity of the human heart to hold and give a force, an intelligence beyond what we humans know as feeling.   In describing Juliet, Bloom quotes the modern philosopher Wittgenstein, who came up with this aphorism: “Love is not a feeling.  Love is put to the test, pain not.  One does not say: ‘That was not a true pain, or it would not have passed away so quickly.”

This RSC production put Romeo and Juliet in slouchy, sloppy modern dress while all around them are players in Elizabethan garb.  This decision underscores the way Shakespeare smashes stereotypes and explodes easy summations.  He took a well-known story about the rebellious impulsiveness of youth and made it a celebration of the possibility of transcendence in the midst of lives doomed by the mechanical turning of many wheels.  He put into the mouth of a 14-year-old girl lines of extraordinary wisdom and beauty; and he showed how Romeo’s very being was changed by her capacity for love. “My bounty is as boundless as the sea, my love as deep; the more I give to thee, the more I have, for both are infinite.”  I leave out the customary slash marks and capitalizations so you might better appreciate the insight under the poetry.  She understood what it might mean to enter the timeless.

Naturally, the New York critics had any number of things to say about this production and I agreed with some of what they said– I too wanted the transforming purity of Juliet’s love to rise up and be a still point in the turning world.   And yet the RCS production came at just the right moment for me, a “teachable moment.” Flames and smoke shot up when the Montagues and the Capulets circled one another in the heat and passion of anger; flames and smoke shot up when the men and women at the Capulets’ masked ball circled one in a courtship dance– while powerful drum-driven music evoked the playing out of inexorable laws of nature, of blood and tribal loyalty.  And in the midst of it, something brighter than fire, timeless moments of clarity, of love.   There I was, heavy-hearted about the riots in England and the decline of civility and cooperation in this country; and here in the midst of the doom and gloom– and in an American armory of all places– were 41 English players and the Globe itself unfolding this timeless event–the opening to true love.   I remembered that such a moment can change a life.  I remembered why Shakespeare stays fresh and why his work calls people to make such extraordinary efforts.