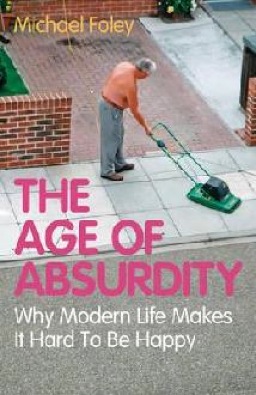 Why Modern Life Makes It Hard To Be Happy

To the Flipper-throughers of In-Between Reviews, this is a book you must not miss out.

In the first chapter, ‘The Absurdity of Happiness’, Michael Foley struggles with the definition of ‘happiness’ and more or less admits defeat,”so the absurdity of happiness is…that it is impossible to define or measure, may not be achievable at all, or, at best, only intermittently and unconsciously, and may even turn into s opposite if directly pursued, but that it frequently turns up unexpectedly in the course of pursuing something else”. So, he says let’s settle for ‘fulfillment’.

The approach in this book “is to trawl philosophy, religious teaching, literature, psychology and neuroscience, for common ideas on fulfillment, then to investigate how easy or difficult it might be to apply such strategies in contemporary life”. Perhaps “one can even grow old, if not magnificently, then at least without feeling entirely worthless”.

The book looks at the whole range of modern man’s activities and finds them, well, absurd. But although writing in a light and amusing manner, Michael Foley has read widely and thought deeply. He quotes extensively from Buddhist and Sufi texts, from Plato, Socrates, Aristotle, Marcus Aurelius, Spinoza, Tolstoy, Schopenhauer, Rilke, Nietzsche, Freud, Fromm and Flaubert among others. He also admires Proust and James Joyce, but no one is perfect.

Happiness and fulfillment, he says, may evade modern man in all aspects of 21st century living, but there is still the possibility of self-knowledge and ironic acceptance of the culture in which we are immersed.

I finished the book wondering how on earth I could be living in the crazy culture he describes. But, yes, I am. And no, I am not happy.