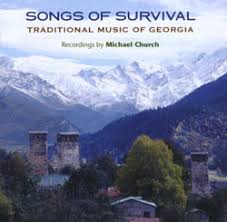 Is music essential for life?  This is the question which arose in me whilst listening to this double cd of field recordings of Georgian music made by the journalist Michael Church.   There is ample evidence provided here of a thriving musical culture with roots in the ancient past (some of the songs are reputedly pre-Christian – parts of Georgia converted to Christianity in the third century).    Most of the tracks are sung, with different combinations of voices (male, female and mixed choirs) using polyphony of at least three parts.    All aspects of life are covered by the recordings – lullabies, healing songs for sick children, wedding dances, laments, table songs, harvesting, ritualised feasts which have a presiding toastmaster (or tamada) and religious services.

There is no delineation between professional and amateur musicians in Georgia.    The egalitarianism of musicianship is striking – with all walks of life valuing and contributing to sustaining the musical tradition.  Some  evocative instrumental recordings are also included, such as the final duduk track which is traditionally played early in the morning after all-night feasts.

The use of much finer intervals than the western even tempered scale is evident, especially when they are employed against an underpinning drone note.  The effect is to emphasise the feeling of the music, whether it be restful, festive, vigorous, playful or religious.    One of the harvesting songs with a complex yodelling melody sung above the main harmonies makes the listener smile as it mischievously speeds up almost impossibly towards the end, but without any sense of tension.

And finally, there are two deeply moving pieces entitled “God Forgive Us”, both unaccompanied religious songs underpinned by a drone with three part harmonies in the Phrygian scale.    On paper, the melody would appear almost childishly simple, but the depth of feeling of the singing and close harmonies themselves exert a profound effect, cutting through to the listener’s deepest feelings.

The quality of singing, playing and listening between the musicians is extraordinarily high.  The sleeve notes of the recording suggest that Georgia is one of the most musical nations on earth, and on this evidence it would be hard to argue otherwise.  There is a clear impression that for the participants, music is not a “performance” but an obligational necessity, underpinned by real quality of feeling, as part of a living community.     Having listened to this cd a number of times, there is a burning wish to search for and experience this tradition at first hand.

Returning to the original question posed at the beginning of this review, is music essential for life?   The resounding answer on many levels is simply – yes.