This is a rare opportunity to hear a live public performance of the extraordinary piano music of Georges Ivanovitch Gurdjieff that was developed in collaboration with Thomas De Hartmann in the 1920s. Gurdjieff spent many years travelling through the Causcasus, Central Asia, and the Middle East, and he was clearly influenced by the ancient folk and religious music of the different traditions that he encountered. Gurdjieff used De Hartmann’s great skill in musical arrangement to transpose this remote and distant music into a suitable form for the piano, using the Western “tempered” scale.

This music defies easy categorisation. It is clearly written to use upper harmonics associated with intervals that occur in the piano, so that each played note may in turn generate several higher notes. If one tries to listen attentively inside when this music is playing, there can be moments of realisation of another possibility of perception in which our functioning (thought, feeling and the body) is brought together and opens to a different quality of energy.

Michele Thomasson is a gifted pianist not only technically but in her exceptional ability to listen which offers the music to the listener as it was intended. 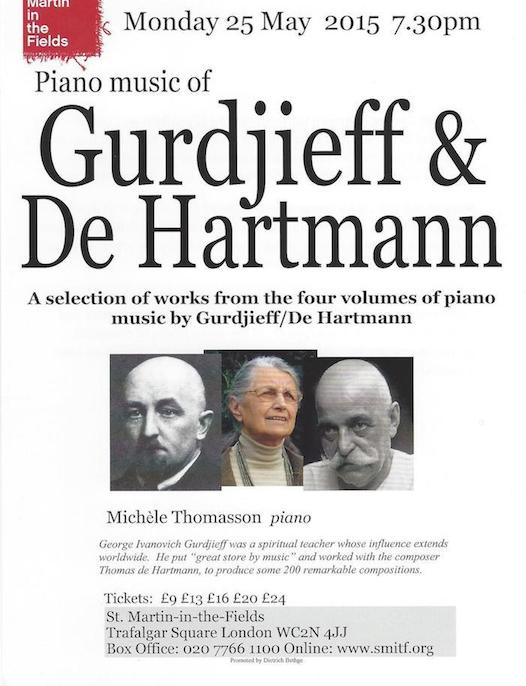 Although George Ivanovich Gurdjieff (circa 1870-1949) was not a composer in the Western sense, he left a substantial body of music. He worked in France with Thomas de Hartmann who had studied at the Moscow Conservatoire under Rimsky-Korsakov and was a professional composer.

Many of the 200 piano pieces they composed over a period of three years during the 1920s are now published in four volumes by Schott. Numerous CDs have been made of their music, both of the original piano versions and of arrangements for other instruments.

Michèle Thomasson was formerly a Professor of Piano at the Lyon Conservatoire. She has given recitals in many European countries and is one of the foremost interpreters of the piano music of Gurdjieff/ De Hartmann. She has also worked for many years to understand what is behind Gurdjieff’s teaching and his music.