Between East and West

As a young boy I used to like to listen to plays for children on the Thursday BBC broadcast of ‘Children’s Hour’. For one series the music chosen was ‘Mars’ from Holst’s ‘Planets Suite’. When I first heard it I was very moved and wrote to the BBC for its name. After receiving the information, and even at that age not one to just leave things, I started a search for other works by this composer and also I read about his life. During my search I came across a recording of his orchestral suite Beni Mora.

I learned that he had composed this after a visit to Morocco. It was listening to this music and being much moved by it that my lifelong interest in Middle Eastern music began.

Most people who are interested in Music will already be aware of the many scenes and styles of Middle Eastern music which can be found in our Western classical tradition. It is not difficult to find examples from many composers in almost any period, whether we take Mozart’s Rondo alla Turca, or Rimsky-Korsakov’s Scheherazade not only Beni Mora.

We can see many of the Middle Eastern musical instruments at the Horniman Museum in London. They are pleasing to the eye as well as to the ear. Often they are made from beautiful woods or, in the case of certain types of drum, from highly decorated pottery. The West must acknowledge a great debt to the Islamic world for many of its instruments are precursors of our own instruments. Examples are the ‘ud, the pear-shaped ancestor of the lute; the ney which holds an important place in the Mevlevi orchestra.; the kanun or psaltery; the rebab, which led to the Medieval rebec; the Naqqara or kettle drums; many types of fiddles variously named from which our violin evolved, and even the bagpipes. 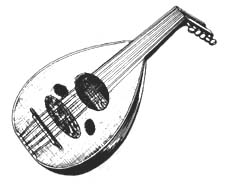 Our enjoyment will be enriched if we understand a little more of the make-up and the differences of Islamic music from our own, and also something of its history. The Koran, the word of God expressed by his last prophet Mohammed (according to the Muslims), is both the visual and aural base for Islamic art. The rhythm of its metre, the form, flow and proportion of its calligraphy, are fundamental. The cant illation of the Koran is the very foundation of Islamic music.

After the initial spectacular period of Islamic expansion, the Umayyad Caliphs (661-750) were the first patrons of secular music. Their court and capital was at Damascus, and under their patronage, great singers flourished. In the secular music of this period instruments were used primarily to accompany singing, the most often used being the ‘ud. Collections of the songs of particular composers, as well as anthologies, were common. Such a collection was made by Yunus al-Katib (d. 765), who probably also wrote the first book on Arabic musical theory. This informs us that the basic musical scale is made up thus: the first, fourth and fifth notes of the scale contain four quarter-intervals and the second, third and sixth and seventh notes contain three quarter intervals, the complete scale thus consisting of 24 quarter intervals or tones. There are seven principal modes (maqams), and it is on these which the melodies are composed.

The rhythmic accompaniment of the music (iqa) is the second important element. It has patterns which are based on the same units as those used in Arabic poetry. These are accented by the strong beat (dum), the light beat (tek) and the silence or rest (sukut) one of the three accompanying each musical syllable. The repetition of the rhythmic unit gives an ordered sequence of beats similar to poetry. Rhythmic units reflect the vowels and consonants of the written word, which gives the possibility of the transcription of poetry.

With the establishment of the Abbasid Caliphate (750), the centre of government shifted from Syria to Iraq. The first century of Abbasid rule became known as the “Golden Age of Islam”. Baghdad was the then centre of civilization and the sums of money spent on music and musicians pass belief. Many who have read “The Arabian Nights” will no doubt remember references to music and the esteem in which it was held by Harun al-Rashid. 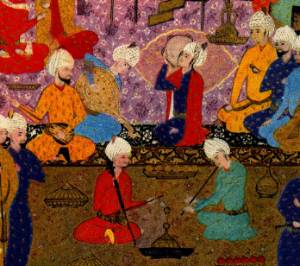 After the fall of the Abbasid Caliphate (847) there was a decline in Islamic political power. There were changes in instrumental music, encouraged by Persian, Turkoman, Mogul and Turkish taste. It was however the Sufi (dervish) orders which gave music a new liturgical position. This was to influence the rise and course of classical Islamic music in many Muslim countries.

Most of the orders encouraged music, and many of their members composed not only religious music for the use of their brotherhood but often classical music as well. This gave classical music in the Islamic world a medative quality, so that the spiritual states evoked are closely related to the inspired states of the Sufis. This was yet another link through Sufism to the spirit of the Koran. There was a relationship between the Arabic and Persian musical traditions. Most performers of Persian, Turkish and Northern Indian classical music have been associated with Sufism. Their music has a liberating power which aims to free player and listener from the fetters of material existence.

The Ottoman Empire was the dominant force in the Islamic world from the 16th to the 20th century. The Ottoman classical tradition is unrivaled in subtlety, and influenced not only all the music of the Middle East but even our own Western music. In the contemporary world the reverse is true: Western music is to be found blaring out of transistor radios even in the desert. At the same time traditional as well as folk and classical music can be heard, still being composed and performed as part of a living tradition.

In the 8th century, music in the Muslim world was referred to as Sina’ al-Musiqa, meaning the craft of music making. This is very much the attitude of the Islamic musician to his role; he sees himself as a craftsman working at making music, and often he will have constructed his instrument himself.

Most of Islamic music relies on improvisation. We must remember that in the Orient there is a melody with rhythmic accompaniment and harmony is rarely used. The performer therefore tries to make a link with his audience and create music, by the grace of God, which is linked with the moment of its creation.

Partly because of its freshness for us, Islamic music leads us with sound and silence to change our relationship with the way we experience time. Seven hundred years ago Mevlana Jalal-uddin Rumi the eponymous founder of the Mevlevi dervishes wrote: “The musician began to play before the drunken Turk, within the veil of melody, the mystery of the eternal covenant between God and Man.” 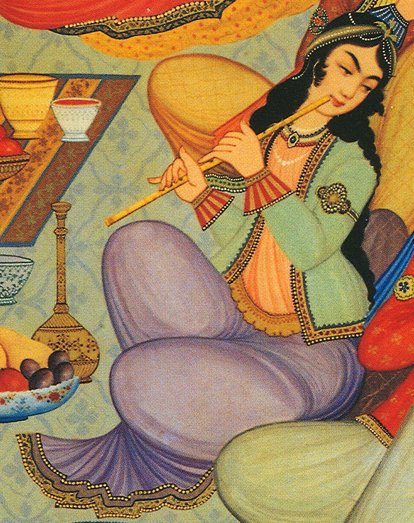