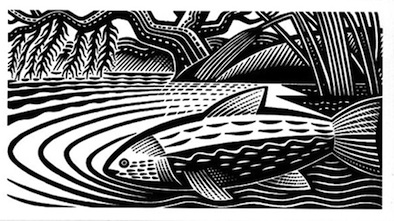 From A Time Hand Fishing

Evening draws out stored heat from limestone rocks. Below Knockaviltoge brown trout are under the cooling shade of a tree. The man and boy are walking along the bank of the Clodiagh River. The man stops and after a few moments devoted to watching the behaviour of the fish he withdraws from direct sunlight and instructs the child to follow. He whispers to the boy who settles onto his haunches near gorse bushes.

Quietly, stealthily the man approaches the water and carefully leaning over the riverbank with his shirtsleeves rolled up, waits. His movement chimes with the clouds passing overhead and with the scent of freshly mown hay. He is a man who enjoys the rhythms of life. Letting arms flow slowly downwards, his hands accurately enter the water, tracing in the current, for they are practised in the art of catching fish.

In tracing a life, we return to the stones, walking along the silent shoreline of the spine. In her book What the Bee Knows Pamela Travers relates how the stones of Chartres Cathedral spoke. When I first read her lines there was disbelief. Later I was to see that it is a truth. The stones are there high above, within. In the tabernacle of the brain they speak from a place which calls upon us to participate, not to set things right, or to succeed, simply to participate.

In the place of the “inner rock”,according to Origen, resided the divine presence, “the kingly inner man.” The elders of the church interpreted the water that flowed from this rock as knowledge of God. In Exodus 18.6 we read “Behold, I will stand before thee there upon the rock in Horeb and thou shalt smite the rock, and there shall come water out of it, that the people may drink.”

The hands in the water are listening as a soft wind ruffles the willows, shifting leaf sounds through the resonance of the river water. A trout sways, casual in the current. The fish is drifting sideways and gently down towards the fingers of the man, which are lit with attention.

The hand is made up of the wrist joint, the carpal bones, metacarpal bones, and phalanges. It has nerves, blood vessels, muscle and tendons. As an ancient unit of length, the hand became standardised at 4 inches (10.16 centimetres),used today primarily for measuring the height of horses from the ground to the withers. The unit was originally defined as the width of a man’s hand from the little finger to the thumb. Agrippa Von Nettesheim wrote in 1510 that the hand is the little world of man, whose proportions, according to Agrippa, correspond to those of the body as a whole: it is the reflection of macrocosmic harmony.

Trout are symmetrically beautiful creatures with the front of the dorsal fin well defined at the point of balance. They have good eyesight, but in addition along their sides runs what is called the median or lateral line. This is not always visible to the naked eye. This line has nerve endings, which are very sensitive to changes of pressure in water – that is, to vibrations. Being aware of this, the man presents his hands softly, naturally trailing the fish from below.

Sparkles of sunlit water ripple in the pool. Within the man there is a giving of consent to strike. He catches the fish, which is arrested upon his hands. The child receives the quality of his attention and learns.

Later, they walk homeward through the enriching shadows of dusk. They share in silence. 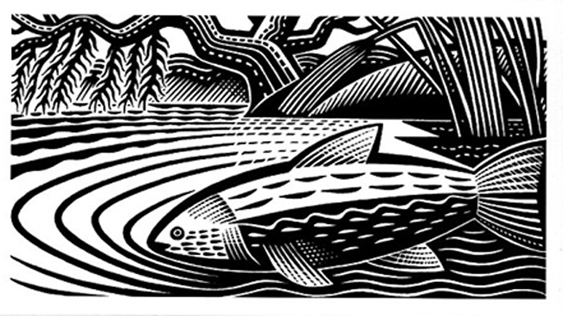