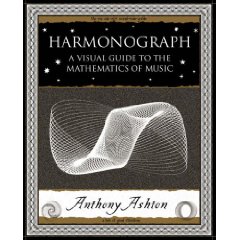 I came across this little book by chance at a friend’s house. It’s part of a series published by Wooden Books (http://www.woodenbooks.com/paperbacks.htm) relating to the ancient arts of number, music, geometry & cosmology.

The book describes the use of an instrument called a harmonograph (first invented in the 19th century), which uses two or three interconnected pendulums to produce beautiful visual representations of musical intervals. The author explains how musical intervals are defined by the simple ratios of numbers, and offers a short but very interesting introduction to musical intervals and scales, starting from the discoveries of Pythagoras regarding harmony to the concepts of harmonic overtones through to the development of the equal-tempered scale to allow musicians to change key without having to re-tune their instruments. The text opens up larger questions to the reader including the idea of relative scale, from sub-atomic particles through to whole galaxies. Does every phenomenon produce it’s own “sound” or vibration?

It is quite shocking to realise that our Western musical scale is actually out of tune, and given the known sensitivity of the human organism to music (we all recognise a jarring interval), what is the effect of this on our collective psyche? In central Asia there are vestiges of a musical healing tradition based on the teachings of Avicenna (also known as Ibn Sinna). Indian music has for thousands of years recognised the influence of different scales on the mood and functioning of the human psyche.

The book is beautifully illustrated and printed and has clearly been written with great care. I’m looking forward to reading other books in the series. For those who are interested in following up the subject of intervals and sound vibrations, I can also highly recommend “On the Sensation of Tone” by Herman Helmholz, which will be the subject of a separate review.