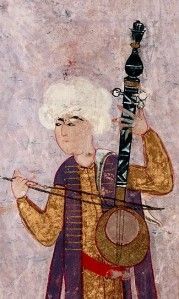 An opportunity had arisen at short notice to travel to Istanbul for a week. I mentioned to a trusted friend (Jeffrey Somers) that I was visiting and he insisted on giving me the phone number of a Dervish friend of his (Nezih Uzel) to contact whilst visiting. On arriving in the city a couple of days were spent exploring some of the wonderful sites, including the Haga Sofia, the Blue Mosque, the Topkapi Palace and the Kariye Museum. I put off dialling the number until on the third day something in me overcame the inner inertia. The initial conversation was somewhat stilted, mainly because of my awkwardness but Mr Uzell eventually agreed to meet me in a lokanta in the Uskudar district of Istanbul.

I will not dwell on the time spent in the lokanta or the evening feast we had in Yildiz Park with several of his pupils. Whilst I did not speak a word of Turkish, we exchanged some words in French and English. My discomfort was gradually replaced by an inner acknowledgement of the hospitality and warm welcome shown towards me, and an openness to a question which burned inside – a realisation of having been a long way from my essential self and at the same time drawing closer to something more true. The meal ended and I expected to return to the hotel. “You come back with us?” asked my host. How could I refuse! We drove in a battered old car to Nezih’s flat. Once inside, Nezih looked at me, sensing my question and then without words unwrapped a beautiful rebab, a traditional Turkish stringed instrument (using horse hairs) that is held vertically and played with a bow. He began to play the rebab and to sing, accompanied by a couple of his pupils on different sized drums.

Even now, after many years, this music has stayed with me. The melody pierced all my usual thinking and emotional habits and directly fed the inner question, bringing me closer to an instinctive truth and reality that seemed new but was simultaneously recognised as being always present, veiled by my habits. The rising and falling of Nezih’s rich voice with the warm sound of the rebab gently demanded that I pay attention to my breathing, calling me towards a different world. I did not want the music to end – there was a strange sense that the music would only last as long as I could retain some awareness of my body and the breathing in particular. When the music ended, there were no words to express what I was experiencing – there was a deep, shared inner silence and gratitude. I had no idea how long the music had been played – it could have been twenty minutes or several hours. And then the evening was over, and I discovered it was two o’clock in the morning. Some of the Dervishes hailed a taxi to take me back to the other side of Istanbul.

The next day, there was a feeling of bereftness – wanting more of the music whilst struggling to understand with my mind what had taken place. It did not feel right to rush back to see the Dervishes during the remainder of my stay, although Nezih’s last words to me were “Come again”. Something had to be digested.

Nezih himself wrote the following lines:-

It is not ordinary music,
This Dervish music, it is music
You drink with your whole body,
Your whole being,
And you live this music

This was certainly my experience, and one which left a lasting wish to explore this and similar types of music. On returning to London and researching the Mevlevi Dervishes I discovered how revered a musician Nezih Uzel was. Only now, many years later have I understood what a gift was shared with me that evening.   There is now an inner conviction that in spite of so many influences to the contrary, there is music which can take us on a shared journey to a higher state of awareness which is more in the present moment, now.

Note – the author is indebted to Jeffrey Somers for sharing some of his learning and passion for music over more than thirty years.
The following cd is recommended:-