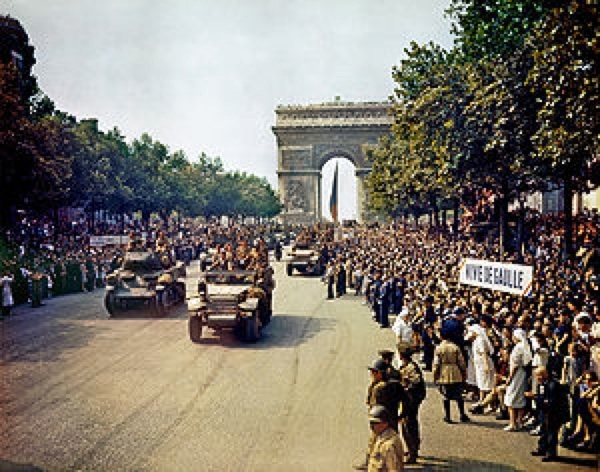 Parisians tend to be divided about Paris in August: some hate the invasion of tourists and the fact that many restaurants and shops are closed; others (myself included) rather appreciate the special atmosphere. It’s true that there are lots of tourists in the usual areas such as Montmartre and the Champs Elysées, but elsewhere there is much less traffic and less activity.

In my area every day seems to be like a Sunday. In addition it becomes possible to be a tourist in one’s own city – to have another vision of it – and I like that. There is a strange combination of the known and the unknown which has its own charm. The fact that the usual shops are closed means finding other ones; that the usual routines are suspended means that I am obliged to do things differently. It’s almost as good as a holiday.

But even within these differences certain themes recur: September begins to loom during the second half of August. Even though I am (fortunately) not involved I can’t be unaware of the inevitable return to school, with the same debates about class sizes, closures, costs of books and materials, and so on; every year there are the equally inevitable industrial conflicts, which re-emerge after the summer break, this time stoked by a controversial and contested “reform” of the pension system. There will be a big strike and demonstration on 7th September (I can also confidently predict that there will be sharply divided estimates of the participation). More demonstrations are scheduled if the government refuses to make any concessions.

Even the weather has its traditions: after the 15th there is often a marked change, and this year it duly rained all day and the next. Despite its reputation as a calm month, August has, of course, often been a month a major political upheaval: both the world wars began in August. As far as Paris is concerned, the 25th is the day on which Paris was liberated in 1944. There are celebrations every year, though inevitably the participants are ageing, and I wonder how long they will continue. But there is a more poignant memorial all over Paris in the form of plaques indicating where someone was shot during the intense street fighting that preceded the German surrender. (This episode was the subject of a rather good film, often shown on television at this time, “Is Paris Burning?” which even uses some actual footage showing ordinary Parisians involved). Their extreme youth is obvious, and is proved by the ages of those commemorated: they are nearly all in their teens or their very early twenties.

The resistance has of course accumulated a mythology of its own, and one sometimes has the impression that almost all French people were involved. The reality was rather different. As Pierre Dac (a humorist involved in broadcasting from London during the war) remarked caustically: “The real resisters where those of 1945, because they managed to resist being in the resistance for five years.” Incidentally, an excellent film on the subject is “The Army in the Shadows” by Jean-Pierre Melville, which manages to show how ordinary people became caught up in extraordinary situations.

Archive footage of the Liberation of Paris: http://www.archive.org/details/LaLiberationdeParis1944 See also:http://en.wikipedia.org/wiki/Liberation_of_Paris