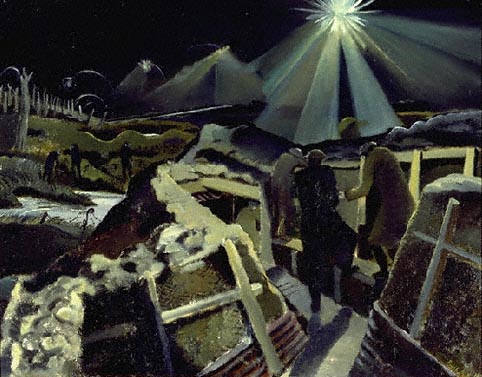 On the Ypres Salient at Night. Paul Nash

A Reflection on the Epilogue to Tolstoy’s War and Peace

After the recent commemorations of the seventieth anniversary of the liberation of the Auschwitz-Birkenau death camps and the ongoing horrifying atrocities in Iraq, Syria, Nigeria and the Ukraine, a question has returned to me more forcefully – what is history? Is it really, as the philosopher and thinker P.D. Ouspensky somewhat provocatively described, merely a “history of crime”? Tolstoy asked two fundamental questions from his analysis of the tumultuous events, beginning with the French revolution in 1789 that spread eastwards towards Moscow by 1812 and then returned westwards, in which “millions of Christian men professing the law of love for their neighbour murder one another” :-

He begins by stating how “modern” history has rejected the ancients’ view of history being guided by the direct intervention of a greater Divinity or Deity, in which individuals endowed by the will of God and nations were striving towards a pre-determined aim. However, this same modern history still follows the practice of explaining events in terms of nations being guided by individuals of extraordinary ability and having a goal towards which nations and humanity as a whole are moving. In practice, was it really the “will” of one man – Napoleon, which caused the Napoleonic Wars? Is it true to say that the collective “will” of the masses was transferred to Napoleon?

One terrifying observation made is that leaders (those not directly taking part in slaughters or migrations of peoples) devise various elaborate justifications to “relieve those who produce the events from any sense of moral responsibility”. A chilling example of this can be seen in the film Shoah (the subject of a separate review). The former Nazi deputy commissioner for the Warsaw Ghetto calmly explains that the reason so many people were dying from starvation was because there were too many to feed, ignoring the simple fact that the Nazis deliberately starved the inhabitants (whilst outside the ghetto, normal life continued).

Tolstoy’s argued responses to his original questions were:-

He then goes to on question if man does indeed possess free will, and concludes that the notion of free will is illusory, and that humanity as a whole must be the subject of a law or laws which we do not recognise.

What is the relevance of this thesis here and now in the early twenty-first century, some one hundred and fifty years after War and Peace was first published? If one looks at the events of the last hundred years, it is difficult not to conclude that in spite of the “progress” of science and technology, and the improvement of living standards for a large proportion of people, the propensity for humans to kill each other is as strong, if not stronger than it ever was.

Is it possible to take an objective view of historical events? If one tries sincerely to recount the major events of one’s own life, it soon becomes apparent that it is not possible to be objective. Are we not driven by chance external events, what people say or do to us? And if we are influenced so easily in this way, how can we expect anyone else to be different?

If God exists, how can wars happen?

My own children have asked me on several occasions how, if God exists, can wars happen? What can one say to them? In politics, people insist that changes in external circumstances will “make things better”, in spite of all the evidence to the contrary.

Is there an alternative possibility for humankind, in which change could begin inside each one of us?

There are countless references, in the great religions, to the potential of a human being which, even allowing for inadequate translation and censorship, have the capacity to touch us. Having grown up in the Church of England, the most striking words that I recall from my early adulthood was the mysterious exhortation in the gospels to “Know thyself”. There is also considerable evidence that these religions exhorted tolerance of other Ways or religions. The thirteenth century Sufi mystic Jalāl ad-Dīn Rumi expressed this rather beautifully when he wrote:

“Christian, Jew, Muslim, shaman, Zoroastrian, stone, ground, mountain, river, each has a secret way of being with the mystery, unique and not to be judged.”

Some examples of references to man’s inner potential from different traditions include:

“The children that walked in darkness have seen a great light” (Isaiah Chapter 9 verse 2).

“In that which is night to all beings,The man of self-control is awake;”(verse 69, The Way of Ultimate Reality, The Bhagavad Gita)

“In the stillness and silence of meditation, we glimpse and return to that deep inner nature that we have so long ago lost sight of amid the busyness and distraction of our minds. So many contradictory voices, dictates and feelings fight for control over our inner lives that we find ourselves scattered everywhere, in all directions, leaving nobody at home.” (from The Tibetan Book of Living and Dying by Sogyal Rinpoche)

Rabbi Baal Shem Tov speaks of “devekut” – “cleaving” to the Divine radiance concealed in all aspects of life (from Communicating the Infinite, By Rabbi Naftali Lowenthal).

At the core of these traditions is the need for an inner awakening in order to find this deeper influence. Sadly, there are well-known historical records which show how many branches of these religions descended from a rigorous questioning for each individual to test their own understanding into an imposed, doctrinal “teaching” that becomes increasingly rigid in trying to control people.

More recently, Georges Ivanovitch Gurdjieff stated that man is born, lives and dies in a state of sleep, caused by our inner functioning being fragmented. There are many superficial allusions to this fragmentation in our everyday language, for example, “he or she let their heart rule their head”. Furthermore, in this “waking sleep”, he affirmed that we have no awareness of ourselves and therefore are no more and no less than machines, reacting to outer circumstances. Each of one us is a particular type of machine, governed by our own mechanical reactions which are imposed on us from early childhood by our surroundings and education. If one thinks of humanity in this way, it is easier to understand how conflicts and wars develop.

Gurdjieff also stated that men and women have a second nature that is buried deep in the sub-conscious. This deeper nature contains much finer energies than the outer mechanical nature, and can be awakened and developed through voluntary inner work. Fundamental to offering some hope out of this situation is the idea that the universe is a living entity comprising different levels and qualities of energy in which the evolution of consciousness is possible on a number of different scales.

Gurdjieff offers an experiential method of searching for an inner attention that brings together the intellect, feeling and body, as an act of self-remembering which allows each of us the possibility to awaken from this sleep through observing our own mechanicalness, to know ourselves. This action of self-observation in turn causes a change, a growth of being. There is in fact an echo of this principle in Quantum Theory in that the action of observing an event effectively changes the nature of the event.

When I came across this teaching, I was dumbfounded. It corresponded to a sense I’d had from childhood that something was lacking in me and that the hidden message in all the great traditions was that men or women are incomplete, and that a particular individual effort is demanded.

Going back to the question often posed by my children (i.e. how can there be a God who allows these terrible wars and conflicts to occur?) – I am confronted with the need to search inside for a deeper connection, and not look for quick answers. Perhaps the only way a real and lasting change of outer circumstances is possible is through being changed inside. We need to undertake a search for our own truth, become scientists of an inner questioning. From trying to study this method for many years, I can verify that only when there is a gathering of this attention can I even try to say more honestly that I am more related to myself. This state in turn allows me to relate to others more. I once read a moving description by an Indian musician of the process he followed when tuning his instrument at the beginning of a concert. “First I tune my instrument, then I tune myself, then I tune the audience”. This inner awakening could also be likened to a gradual attunement to a much finer quality of musical scale or sound, which is waiting for us to join it.

Is this idea of sleeping humanity really so radical? If one ponders this question, perhaps the idea of two conflicting histories can arise. The first (recorded by historians) is a history of man asleep. The alternative view is one that is far more tenuously described – the individual struggle for increased consciousness.