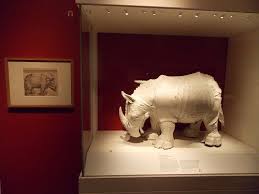 A 600-year History in Objects

Why has this exhibition not had very positive reviews in the press?

For those not familiar with the history of Germany (or it might better be said, German-speaking peoples) it is a good beginning. The importance of “The Holy Roman Empire of the Germans” in its history is rightly emphasized. There it is, on the maps, in the centre of Europe, until destroyed by Napoleon. Admittedly it would have been better had the exhibition begun in the year 800, when Charles the Great (Karl der Grosse, Charlemagne) was crowned, with a map of his empire and its division (into three, of course) after his death, showing what was to become “France” and, much later, “Germany”, which still in the eighteenth century was divided into more than 150 kingdoms, principalities, grand duchies, duchies and free cities. We are shown the extent of the Hanseatic League and the many centres of German people and culture which are no longer in today’s truncated Germany, such as Basel, Strassburg, Prag, Pressburg (Bratislava, Slovakia), Danzig (Gdansk, Poland) and Königsberg (Kaliningrad, Russia), and the Sudetenland (Czech Republic). That the economic collapse and catastrophic inflation led to the rise of Nazism is true, but in itself that was the inevitable consequence of the revanchiste Versailles Treaty.

The exhibition is in terms of objects and could have included more notable works of art from the “Northern Renaissance” and from the nineteenth century, especially Caspar David Friedrich (there is a wonderful painting in the National Gallery). There are famous portraits of Luther and Goethe, amongst others. But what of the musicians? Bach, Haydn, Mozart, Schubert, Beethoven, Schumann, Brahms, Liszt, Wagner, Richard Strauss, Mahler, Bruckner….

Amongst the objects are a number of extraordinary clocks and other mechanical constructions, sculptures, swords, flags, the Gutenberg Bible, the Volkswagen Beetle, and a film, right at the entrance, showing the fall of the wall that divided West and East Germany- a stunning and moving beginning.

A major omission is any concentration on the Thirty Years War, barely mentioned. In the seventeenth century Swedes, French, Austrians, Prussians and Poles criss-crossed German lands and fought each other in rapidly changing alliances which killed one-third of the population. It began as a religious war- Protestants against Catholics- but was soon the same as all wars, a struggle for power. The English Civil war and the French attack on the Huguenots had nothing like such devastating consequences for the development of any stability. Fortunately, the very division of “Germany” into so many little regional units meant that here and there, culture could survive. It wasn’t until the Second World War that cities were bombed to destruction. One million civilians died between the plot against Hitler and the end if the war, because, however critical of Hitler many of Germany’s leaders were, they could not accept ”Unconditional Surrender”. The distribution of the meagre food rations was somehow maintained in the face of the imminent allied conquest into March 1945, but then came the catastrophic collapse. The citizens surfaced from their air raid shelters and cellars to behold ruined cities, Russians and starvation, and the news- it was news for many- of the holocaust.