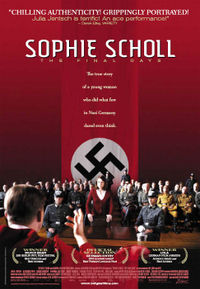 Early in 1943, at the time of Stalingrad, there was a widespread resistance movement amongst the students at Munich University called the White Rose. This film, based on historical records (letters, transcripts of the trial) tells the true story of how three students were caught and tried for writing and distributing anti-Nazi leaflets, and focuses on one of them. Sophie Scholl (Julia Jentsch), a devout protestant, remains resolute in her belief that the Nazi regime is inhuman and will be vanquished. She refuses not only to betray her companions but in any way to exonerate herself by relinquishing her beliefs. What does her interrogator think and feel? Sometimes he rants violently- “There is no God!”- sometimes he submits to silence.

Many members of the White Rose were in fact later captured; most were executed. Fine, spirited, intelligent young men and women, who could have made a significant contribution to post-war Germany, had they kept their heads down. Or was it more important to make this sacrifice, as an example? How would I have manifested? Could I have been as resolute as Sophie?

Presiding at the trial as judge was a man described as a former “Communist Kommissar”. Some viewers may not know that in 1919, in the chaos of defeat, communists staged revolutions in several German cities, including Munich, and temporarily installed régimes with “Kommissars”.

Although this is not a film of the quality of “The Lives of Others”, I am left wondering at what others, nearly of my own generation, had to live through.

A copy of the leaflet was sent via Sweden to England by von Moltke, one of the leading opponents of Hitler. Thousands of copies were distributed by allied planes all over Germany- yet all efforts by the German resistance to obtain support from the allies were rejected.