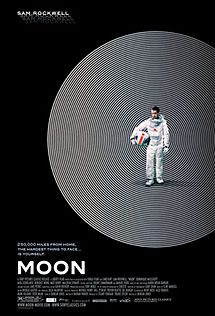 If you’re tired of Star Wars or science fiction films in which humans battle for survival against yet more lethal aliens, Moon is something altogether different and more intelligent. Set in the near future, Sam Bell is an engineer nearing the end of a three year assignment on the moon, overseeing a large mining operation for helium-3 which is sent to earth to supply fusion reactors to provide most of the planet’s electricity. He is assisted by the base computer, called Gerty (voiced with characteristic ambiguity by Kevin Spacey). During Sam’s assignment, he’s not been able to have any two-way conversations with earth due to satellite communication issues, so he is limited to sending and receiving one-way video calls to his wife, who’s just given birth to their daughter, and the mission controllers on earth.

With less than two weeks before the end of the assignment, Sam starts to hallucinate – seeing a young girl, before he has a catastrophic crash in a moon rover. He wakes up in the base’s infirmary, but how did he get there, and is he really alone? Why is it that Gerty is able to have a two-way conversation with earth but he isn’t? Why has a rescue mission been dispatched from earth? It would be wrong to give away the plot, but the story unfolds in a quietly ingenious and compelling way, gradually changing in tone from a reflection on loneliness to a psychological thriller and a paean to the rights of an individual, as Sam begins to question more and more about his situation, and what is happening to him.

The film clearly pays homage to some earlier classic science fiction films such as 2001, Silent Running, Dark Star and Blade Runner but the story is refreshingly original. Filmed in 33 days, the film looks spectacular in spite of having a low budget and the acting from Sam Rockwell as Sam Bell is phenomenal, conveying a huge range of emotions as the truth of his situation emerges. Recommended!