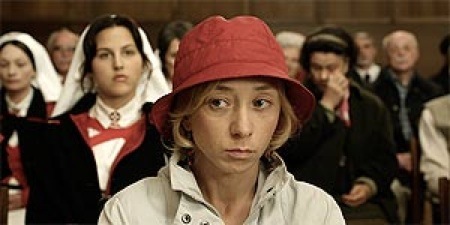 The film follows a group of religious believers, seriously ill or crippled, in a pilgrimage to Lourdes, where Bernadette saw the Virgin Mary, and miraculous cures have taken place. Sylvie Testud plays Christine, a painfully thin young woman who has advanced multiple sclerosis and is completely paralysed below the neck. We see her being fed, being put to bed for the night, her limp body lifted by two sisters into her wheelchair….so quietly and undramatically shown, just part of her daily life, that suddenly there is a glimpse of feeling what such a life must be. When I am nearing death, will I perhaps be like that?

What are the motives of Christine and the other pilgrims? Do they just want their bodies to be healed? But the priest says that what matters is that the soul is healed- only then may the body be healed also.

For some days the pilgrims are there, with a different programme each day. The pace is slow and gentle. There is time to follow the exchange of glances, eyes meeting or not, brief conversations, young sisters being inattentive and drawn to the volunteer officers, Christine’s quiet gaze, and all of them enfolded in the special atmosphere of that place, reinforced by the rituals, and intelligently and feelingly supported by music. This sensitive film is genuinely touching, because the characters are having some real perceptions- difficult, sad, joyous. How can a “cure” take place? Why this one, and not another, the priest is asked. He gives a wise answer.