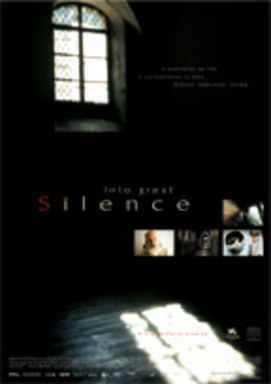 This very long German film was shot in the monastery of the Grande Chartreuse in the French Alps, and almost all of it is in silence, like the monastery itself. The sound most often heard as the film follows the cycle of the year, from one winter to the next, is of the bell being rung. The monks spend most of their time in isolation, praying, studying, eating, one man gardening, one man sawing wood…. only sharing meals on Sundays, also the only day they may speak.

There is no commentary and we never learn why the monks chose this way of life or whether after entering they passed through any crises. The lyrical photography follows the cycle of nature, snow, the big thaw, trees, colours, mountains… and from time to time the faces of the monks, one at a time looking directly to the camera. Towards the end some monks speak a few words. One says that men know the past and the present, but God knows only the present, which is always.

The director was granted permission to make the film by the Carthusian order in 2001 on the condition that he used no artificial light, added no music or commentary and came to the monastery, near Grenoble on his own.

This film, which I saw in Oxford last week, doesn’t leave me alone. Memories of it keep popping in without invitation. For example…. the memory of an impression of wood being cut for winter logs by a novice monk, and how very dry the wood seemed; a monk praying alone in his cell ‘… in secret…. not seen of men…’; the sound of the laughter of monks sliding and playing in the snow.

What is the nature of this film which has gripped me in this way? Its theme? Its atmosphere? Its texture? Its pace? What is it that won’t let me be?

Actually I know what it is, but I’m afraid to face it.

That sense of knowing something inside, yet refusing to turn towards it repeats over and over in my life. King Lear shuts out the one daughter who loves him, and the only one of his daughters who will tell him the truth.

I know I need to face myself fair and square; without bargaining, without pretence, without any prop or mask; to try to see myself as I am now. Or indeed, I need not. The urgency of the situation as I experience it at the moment, will pass; I feel the excitements of everyday life already beginning to predominate again.

I’m talking with others at dinner:”Into Great Silence‘, wasn’t that a good film, eh? ‘Casablanca’, yes, that was a good film, too. They were both good films”. And I feel…. what exactly? That dinner and conversation are good companions, and I have forgotten there was something very important to be understood.

In Lear’s case he has a chance to redeem; he grasps it with heartbreaking courage at great cost. In a flash of vision, he finally sees himself as he is, and even in his very old age, a new direction opens to him. Question: Is there always another chance? Careful now, if I too much believe there is, tomorrow will never end.

I try a protest: I can’t give up everyday life so entirely as to spend my remaining years searching in The Way Of The Hermit/Monk. But wait a minute, let me just pause to take in what I have just said ……

Of course I’m not asked to go to a monastery; the request is to the inner.

And that is the taste and flavour of this remarkable film…. it doesn’t demand anything, but it doesn’t let you go easily. It keeps prodding you, plucking you by the sleeve…. At the showing of this film in Oxford, there were, I suppose, forty people in the cinema. I saw no-one leave, heard no rustle of sweet-papers nor was there any outside demand on the attention, away from the film. Three hours passed without any thought about time. And as we got up out of our seats, a man beside us smiled and said, ‘Let’s go quickly before the music starts..’ 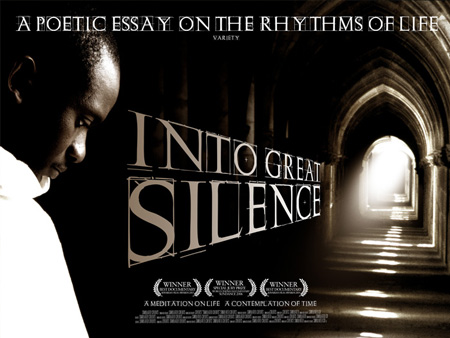