It would be a pity to disclose much of this story, told with great sensitivity and at the right, rather gentle pace, of what happens to a woman (Scott Thomas) who after 15 years in gaol goes to live with her younger sister (Zylberstein) and her family in a French provincial city. It is superlatively well acted not only by the principals but by all the cast.

There are many unforgettable moments. When she gets a job, her boss tells her to be less withdrawn. Feeling awkward at having to tell her this, he does not look at her, paces about in his office, keeps saying “Of course, I understand… “ Suddenly she confronts him: “What do you understand?” It brings him, and us also, to a complete stop. For a long moment, they just look at each other.

The film shows us the difference between those who know that they do not understand, and others who are critical or just impatient. We feel with the woman in her inability to tell what happened, though we do not know the cause. Each scene, with her sister’s family, friends, colleagues, contributes to the unfolding of the story. In the end, it is harrowing. Sad, certainly; but truly uplifting, in its portrayal of suffering. 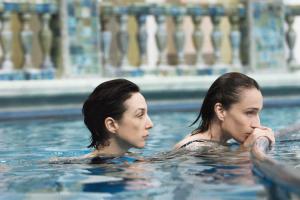