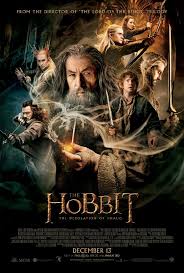 The Hobbit – The Desolation of Smaug, Directed by Peter Jackson

I wish I could say that this instalment is faithful to the book and/or is worth watching. Sadly, it is neither. It’s a completely overblown film – laden with extraordinary special effects but completely lacking in a credible narrative. The team behind the film has simply bolted on prolonged, mindlessly repetitive action sequences and a far-fetched love story between an elf and a dwarf which add no value to the story, for the sake of justifying three films. Simultaneously, they have shortened certain parts of the book which conveyed the mystery of some of the characters, such as Beorn the skin changer, and the elusive wood elves, who the dwarves attempt to contact when they become lost in Mirkwood.

This is a pity because there are some good performances, notably from Martin Freeman, reprising his role has Bilbo Baggins, Stephen Fry as the Master of Laketown, and Benedict Cumberbatch as the evil voice of Smaug – the enormous dragon who jealously guards the treasure of the dwarves’ lost kingdom in the Lonely Mountain. The film is stunning to look at, in particular the scenes where Bilbo fights the giant spiders, and when Smaug appears from beneath his mountain of gold.

However, I couldn’t wait for the end of the film. The climax completely jettisons the original story (which adds a great deal of suspense over the dragon pretending to be asleep) in an elaborate and ludicrously over-the-top attempt by the small band of dwarves and Bilbo to prevent Smaug from leaving the ruined halls of Erebor (the dwarves’ lost kingdom). For a 12A certificate, there was a high level of violence in the film with multiple beheadings of orcs.

My children were also unimpressed, and thought that the film-makers had ruined the plot. However they now want to read the book again to re-discover the innocent charm and wonder of the original story.

Despite the massive budget (rumoured to be over $750 million for the three films), Hollywood has completely forgotten that a good screenplay with character development that credits audiences of all ages with some intelligence is the key to an engaging film. And they should have just made one film for the whole book.

Sadly, I have to agree with your assessment of the film. There is nothing wrong with departing from the original text in a film adaptation if the aim is either to find a cinematic way of holding true to the spirit of the original or alternatively to use the original as raw material for something new. But this does neither of those. All it does, as you say, is to jettison the charm of the original to make way for crude spectacle, the business with the dragon being a particularly messy instance. Having said all that, however, my children enjoyed it!