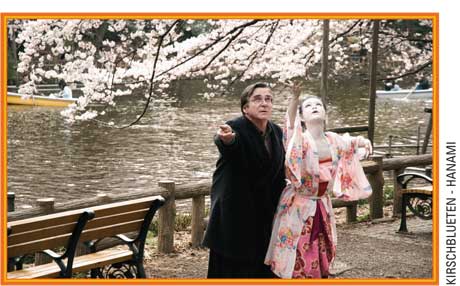 In German with English subtitles

A story about death, living and dying. Strongly influenced by Kurasawa (Ikiru- To Live) and by Ozu (Tokyo Story).

It would be a pity to tell the story here. Suffice to say that while not quite up to Kurasawa’s masterpiece, it is very good, just a bit too long perhaps, but beautifully played by Elmar Wepper as the elderly man, Hannelore Elsner as his wife, and Aya Irizuki as the Japanese girl who befriends him in Tokyo at the time of the (ravishingly beautiful) cherry blossom festival.

Shown at the German Film Festival in December 2008 in London. Available on DVD.