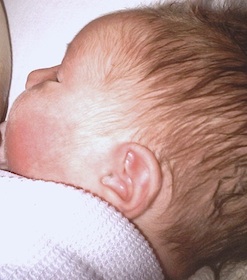 Finally about a month later than predicted, my fourth grandchild (my daughter’s second child) arrived, at 4.39pm Thursday 19th Aug. All the theoretical plans for a “natural” home birth went out the window, he was so large and late, and eventually at the hospital when they saw that he had hardly any fluid left to float around in, they induced him, but during the nearly 24hrs labour my lovely daughter managed somehow to avoid drugs, epidural injections, caesarian, etc. And now there are just a few stitches to mend a tear.

She didn’t want me or her partner there as she knew we would have demanded stronger pain relief for her. So I went about my chores, and papa sat around in cafes all morning, then couldn’t stay so far away and waited in the hospital reception area where her cries were ringing in his ears.

I felt for him and we were in touch by mobile.

At the exact moment of birth I knew the child had emerged even though I was about 2 miles away, buying vegetables at the time-simultaneously sensing the gift, the achievement, the body comfort-sacrifice that a mother offers for bringing new life to this world. The impressions in and around me, as I am present, in the supermarket -the other customers, the staff, the merchandise were deeply vivid and singular.

Not very long after that I picked up my own mum aged 97 and we drove to the hospital where we were able to see and hold the baby. On Saturday afternoon they came home and the baby met his 3 yr old brother who was spontaneously tender and affectionate to him. In fact he asked for his pyjamas so they could all lie down and sleep, and he told the grown ups to “shh!” – to let the baby rest.

So what is on offer for a newborn in our world? How soon will he stop trusting those in whose arms he is held, whose milk he drinks, to whose routines and habits he will be expected to conform?

Will he gain strength or capitulate facing the challenges sent to him by chance or destiny? Will he vigorously keep asking “Why?”

Can I, or anyone protect him, and can we support his life-energy and courage to accept, and manage and learn? Can I likewise learn to nourish the new life force and wish in myself which is invoked by his presence?