At the time of my retirement in 1999, I would have described myself as a neuroscientist. My scientific career was initially decided almost by default, when my friends decided to do Science at University and I had no clear idea about anything. Opting to major in chemistry because of a natural propensity for experimentation, I obtained a PhD in Organic Chemistry, but then had to think: what next? What do I wish to do in life?

What next indeed? No real idea except that I was not attracted to the idea of spending my whole working life in Chemistry solely for its own sake, that is, the further manipulation of atoms and molecules just to extend knowledge of how this can be done and to further elucidate the principles behind these interactions, interesting and ‘important’ (from a worldly point of view) as this is. For some vague reason I needed something more.

A marvellous chance to relax and ‘think about life’ came during two post-doctoral years at Yale University with the assignment to collect a range of different marine sponge species in the warm seas around the idyllic island of Bermuda for the purpose of investigating their chemical constituents. I spent six blissful weeks relatively alone in the Marine Biological Station there (before the summer season when it became full of visiting scientists), collecting a wonderful array of sponges of diverse shape, size and colour. I had with me a collection of religious, psychological and philosophical texts to occupy the solitary evening hours. But a strange dissatisfaction with all such literature was developing. All these wonderful theories, hypotheses, dogmas, and ‘truths’ (wild speculations?) seemed to depend on the functioning of the human brain, even to the point of different beliefs and ideas being formed after the ingestion or injection of chemicals.

The functioning of the brain seemed therefore to involve chemical processes within it, resulting in varying experience (illusion?) of sensations, emotions and thoughts depending on the chemistry of the moment. As it was the chemical interactions in the brain that seemed to produce all these wonderful ideas, had they any validity in themselves? Had any ideas (with or without exogenous chemical intervention) any validity in fact? At this time nobody had any idea (scientifically speaking) of how it (the brain) actually worked. A way ahead for me was beckoning: Chemistry of the Brain – now known as Neurochemistry – then in its absolute infancy. I am speaking of 1956, the year of the first issue of a new scientific publication called The Journal of Neurochemistry.

And there were other, even more demanding questions. One night, soon thereafter, sleep evading me yet again, as I wondered about life, and ‘me’, that unique sense of I, myself, I took to wondering where exactly in my body was ‘I’ located, how much of me was included in the feeling of ‘I/me’? I imagined myself pruned down successively of arms, legs, various internal organs, and concluded that ‘I’ would persist as long as consciousness did, until there was little left except that part of my brain (an assumption, not necessarily justified) in which the concept of myself manifested. Would my proposed neurochemical studies ever throw any light on this? It seemed a tall order, but a strong drive was beginning to launch itself – the ‘search for myself’, my self, my SELF, by whatever means presented themselves or resulted during the course of such a search. Neurochemistry would at least provide a scientific launch pad (and, hopefully, an income).

Soon after my return to Yale, I began making enquiries of medical friends there how best to get into the field of ‘brain study’. I was told that there was a particularly famous neurophysiologist in Australia, by the name of John Eccles (later Nobel Prize winner), and perhaps he would be able to advise. I wrote to him and expressed my interest in the field, pointing out that I was a ‘pure’ chemist, without any physiological training, nor even any biochemistry, come to that, but that I was convinced that there must be a place for someone with chemical knowledge in any team studying the mechanisms underlying the activity of the central nervous system. He promptly offered me a place in his department, to start a year later.

Possibilities of addressing the ‘key questions’ I had set myself, other than through science, soon did present themselves. A new friend at Yale, Tilo Ulbricht, also a chemist, had himself just embarked upon a similar search, in the form of the Gurdjieff ‘work’, and sensing my interest in such things, told me something about it. I found what he told me extremely interesting, but not immediately compelling. One ‘system’ amongst many it seemed to me: perhaps any one of several was a possible way for me, perhaps none. A further time for digestion was required. More reading on all fronts under the headings of philosophy, psychology and religion, all the major religions, that is, plus those texts relating to ‘spiritual paths’ in general. Amongst the latter was William James’ ‘Varieties of Religious Experience’ and Aldous Huxley’s ‘The Perennial Philosophy’, both intensely interesting, but not leading anywhere for me personally, at that time.

Hinduism also interested me, the more so because another friend, Rajan (note 1), also a chemist, had been brought up on it. I read the Bhargavad-Gita, but I could not, at that time, really fathom the concept of the Atman (even though I had, in a sense, already experienced it, without realizing it). Tilo and Rajan were my two closest friends during this period, and their continued friendship and advice proved immeasurably valuable as my personal search intensified in the following years.

Dual tracks now developed: (1) basic research on how the brain passed chemical signals from both external sources – via sense receptors – and internal sources – via chemical messengers in the blood – to affect the electrical activity of its component neurones, and (2) a search for meaning in life through my utilisation of the brain and its various means of processing sensation, emotion and thought, regardless of how it worked! I soon came to realize, thanks to Tilo, that the Gurdjieff teaching offered the best immediate way forward for me on this latter track.

Not the space here to describe much of the next sixty years or so except to say that my life in Neuroscience (track 1) turned out very successfully – as regards elucidating previously unknown chemical mechanisms within the brain, that is – but singularly unsuccessfully at elucidating the nature, location and origin of the sense of ‘I ‘.

Evolving from track 2, however, was a progressively increasing understanding of two sorts of ‘I’, the existence of which I had not originally suspected:

(1) the ego (actually a ‘chameleon I’, having multiple manifestations continuously changing according to the circumstances, but unnoticed as different from each other); basically, this ‘I’ (or set of different Is) is the result of the automatic electro-chemical activity in the brain, the same as in all animals, arising from the inborn instincts for survival and reproduction, but compounded in man by all sorts of social conditioning manifesting in a sense of his own significance and importance, yet without usually the actual experience of himself mechanically reacting in this or that way in any situation: in other words, the ‘I’ of the ordinary, automaton, man.

And (2) the ‘I’ that does (or can) experience itself in all and every situation, the unchanging Consciousness of Self, the Atman, the Witness of ancient Asian tradition – if it is allowed to by virtue of a progressive freeing of oneself from the all-pervasive, all-dominating, and usually totally occlusive, ego. 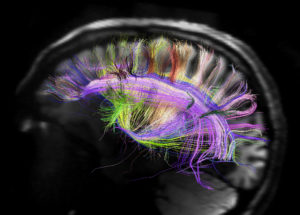 So, where is ‘I’ (the Self) located?
I no longer think that the Consciousness-of-Self originates in the brain. I believe that in the manifestation of this special consciousness the brain processes information it has received from another source, just as light is processed to produce the sensation of vision. My search, in toto (false paths being also helpful), seems to have developed some form of increased receptivity, enabling shorter or longer periods of Self-realization which fill the need for that long-sought something more. Everyone is born with this possibility, but needs that deeply-felt sense of ‘something missing’ in ordinary life for its development. This sense of lack then becomes the prime motivating force in his life. Hence Jesus’ injunction: “Ask, and it shall be given you; Seek, and ye shall find; Knock, and it shall be opened unto you”.

Does the Self survive the death of the body?
In some form, it surely must. It is just too improbable that over billions of years, a set of sub-atomic particles, atoms, molecules, and living cells successively organize themselves into a particular form in such a way that enables that particular form to have an awareness of itself as ‘I’ and ‘me’, for an infinitesimally brief flash of cosmic time, for no purpose. What need has a mechanical universe of consciousness within any form? Automatic mechanisms would serve its ‘purpose’ (non-purpose) perfectly well without the need of consciousness; only physical and chemical laws are necessary to maintain a mere mechanism.

It has long been held in traditional teachings that consciousness is, in fact, that cosmic energy whereby man (and, by implication, all organic life) evolves over time. It requires more than Darwinian evolution for man truly to evolve, except in the mere superficial sense of changes in bodily form to fit ever-changing environmental conditions. The brain may become ‘cleverer’, as part of this latter process, but ‘I’ will not change. ‘I’ is eternal (“Before Abraham was, I am”). But it has to be connected with to be known; inborn receptive mechanisms in the brain must be increasingly sensitised by individual search and effort.

This implies the existence of a Prime Consciousness, which can be called whatever one wishes: Cosmic Consciousness, the Absolute, the Prime Source of Everything, Brahman, God. Consciousness-of-Self is considered, in ancient and even more modern tradition, to be the manifestation in man of that same energy (“The Kingdom of God is within thee”; “Seek ye first the Kingdom of God, and all else will be added unto you”).

Can man ever learn ‘how consciousness works’, in the way that he increasingly (thinks he) does in the case of the laws of the physical universe?
No. He can only experience it, and give thanks.

1. Dr. S Varadarajan, Chairman of the Bhopal Inquiry. President of the Indian Academy of Sciences