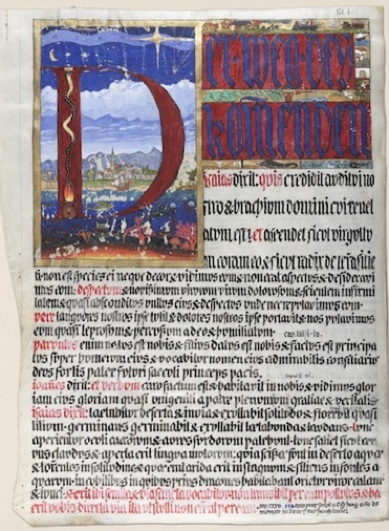 It was with a sense of wonder and excitement that I opened the first page of the facsimile edition of Jung’s Red Book. At the head of the first page of dense gothic lettering in Latin and in German is a capital D within which a landscape is set. Yet this is not an illuminated medieval manuscript but the manner in which Jung chose to transcribe the contents of his black notebooks in which he recorded the dreams,visions and active imagination that almost overwhelmed him in a flood of material from his unconscious from 1913 onwards, after his break with Freud. It is, he announces, his encounter with the ‘spirit of the depths’ as opposed to the ‘spirit of the times’- scientific rationalism. “All my works, all my creative activity,” he would recall later, in Memories, Dreams and Reflections, “has come from those initial fantasies and dreams.”

He experienced the desert within, asking,’Must I also learn to be without meaning?’ and in his dialogues with biblical and mythical figures he is grappling with big questions and contradictions: man’s incapacity to be a ‘hero’, the idea of God, the relationship between good and evil, transformation and death. Towards the end of the book the text gives way to a remarkably beautiful series of full page paintings, including mandalas, which speak eloquently of the journey on which he embarked.

On page 205,the last in the book, Jung states: ‘I worked on this book for 16 years. My acquaintance with alchemy in 1930 took me away from it. The beginning of the end came in 1928 when Wilhelm sent me the text of The Golden Flower, an alchemical treatise. There the contents of the book found there way into actuality and I could no longer continue working on it’.

A clue to its value for Jung can be found in the advice he later gave to a client who was experiencing the deeper and sometimes frightening parts of her mind. “I should advise you to put it all down as beautifully as you can — in some beautifully bound book,” Jung instructed. “It will seem as if you were making the visions banal — but then you need to do that — then you are freed from the power of them. . . . Then when these things are in some precious book you can go to the book and turn over the pages and for you it will be your church — your cathedral — the silent places of your spirit where you will find renewal.”

The facsimile edition can be seen in Blackwells bookshop, adjacent to the very lively cafe in the Wellcome Trust building opposite Euston Station in London and can be ordered through Amazon for £95. It is appended by a full English translation with detailed footnotes citing references to the black notebooks. The Introduction is by Dr.Sonu Shandasani, who was also instrumental in helping to usher the volume into the light after it had been stored in a Swiss bank vault for many years. The original is now on view in the Rubin Museum of Art in New York.