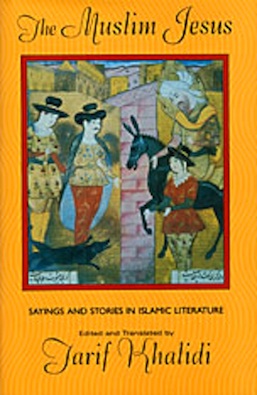 Sayings and Stories in Islamic Literature by Tarif Khalidi

In these times when Moslems and Islam are very much to the fore in all kinds of ways, it would be a good idea to understand some of their beliefs about, and attitudes towards, Jesus Christ (Peace be upon Him) and Christianity. In this regard Tarif Khaladi’s book is very useful. Much of it consists of quotations and sayings about and attributed to Jesus.  But in addition it has a detailed and interesting introduction which makes clear a number of important points such as the following:

In Islam, Jesus is regarded and revered as a Prophet.   A Prophet is a human being.  He is not divine. He is the “voice” of  God, a messenger of God, endowed with the capacity to hear God’s voice.  He is not God in any sense, as Christians believe he is.

Moslems do not believe that Jesus was crucified by the Jews, nor that he died for the sins of mankind.  In the Koran it says,

“…they killed him not, nor crucified him, but it was made to appear to them…nay, Allah raised him up unto Himself…” and

“Behold! Allah said:  O Jesus!  I will take thee and raise thee to Myself and clear thee (of the falsehoods) of those who blaspheme; I will make those who follow thee superior to those who reject faith, to the Day of Resurrection.  Then shall ye all return unto Me, And I will judge between you of the matters wherein ye dispute.”

The doctrine of the Trinity, God the Father, God the Son, God the Holy Spirit is not supported in orthodox Islamic teachings.  God (Allah) is One. These three Christian beliefs are strongly denied by Moslems, but this does not influence their feelings of reverence for Jesus himself.

“To what extent is Jesus singled out by the Koran for special esteem, and to what extent does he share in the general esteem shown to all Koranic prophets?  In broad terms, the argument has tended to hinge largely on the proper interpretation of two epithets applied to him in the Koran: he is said to be a ‘Word’ from God and a ‘Spirit’ from HIm.”

This is an important point, says Khalidi, because future commentaries and stories about Jesus are influenced very much by what the Koran says about Him.  In the Koran, Jesus is presented as a Prophet, distinct from the beliefs which his followers have about him and his teachings.  Jesus is “cleansed” of them.   Other major Prophets from the Hebrew Testament appear in the Koran, but Jesus is the only one who “is embroiled in polemic”.   But, as said, it is not Jesus himself who provokes controversy, but what his followers believe was his message.

So the introduction contains such carefully written examinations and explanations which are all relevant to the subject and bring interesting, new material for most of us.   Below is a selection of passages taken from the works of Moslem writers over the years.

Jesus said to his disciples, “Just as kings have left wisdom to you, so you should leave the world to them.”

Whenever the Hour was mentioned, Jesus would cry out in anguish like a woman.

Christ said, “Be in the middle but walk to the side.”

Jesus said, “Son of Adam, if you do a good deed, try to forget it, for it abides with Him who will not forget it.”

Jesus was asked, “Spirit and Word of God, who is the most seditious of men?”   He replied, “The scholar, who is in error.  If a scholar errs, a host of people will fall into error because of him.”

Jesus said, “Place your treasures in heaven, for the heart of man is where his treasure is.”

There are other stories and accounts, too long to quote here, as for instance the one where Jesus walks through the Valley of Resurrection and talks to a skull; the story of how Jesus brought the dead wife of a man back to life, and what befell them both…