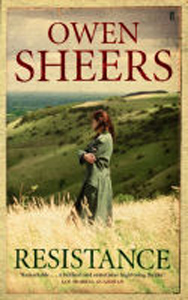 In this country the number of books and films devoted to the two World Wars does not diminish with time perhaps because we now live in a relatively protected environment so have to look back to find times of intensity and challenge. But how would it feel to have one’s country invaded by foreign troops? For many people throughout the world it is not a theoretical question and it haunted me, giving a contemporary relevance to Owen Sheer’s novel, which presupposes the failure of the 1944 Normandy landings and subsequent invasion of Britain.

The author’s spur for writing came from stories he once heard, and subsequently found to be true: in 1940, when invasion had seemed an imminent possibility, a secret unit of resistance fighters was formed among the farmers in the Black Mountains. They were the Auxiliary Units Special Duties section, vowed to absolute secrecy, with bunkers and weapons hidden in the hills in order to sabotage enemy lines. Drawing on this background, Owen Sheers envisages what might have happened had all the seven farmers in the secluded Olgon Valley heeded the call to arms.

The story begins when it gradually dawns on the women that, without a word, their men have disappeared in the night. How were they to cope with the milking, the ploughing and the heavy work, with only each other for support? Survive they could not have done, particularly through the heavy winter, the valley cut off by snow from the rest of the world, had it not been for a small German patrol that came to be stationed in the valley. Under an enlightened officer they begin to offer the women assistance, offers at first only grudgingly and tentatively accepted, though for the men it is a healing experience to work on the land after the rigours of active military service on the front line. News of the war reaches the valley only intermittently: the fall of London, Birmingham captured. As I read the familiar names, and envisaged the loss, it jolted my habitual responses stirring an impulse of patriotism. How would it feel to have foreign troops stationed in our major cities and how could it do other than lead to atrocities perpetrated by each side?

Most of the novel however takes place within the close confines of the valley. The sense in which the women are rooted in the land, and their kinship with the animals that ensure their livelihood, is conveyed with deep conviction. The focus is in close-up: Sarah, the heroine, can feel the indentations in the horsehair mattress where her husband has lain, and experiences that these gradually ease from the landscape of the bed as time passes. She cannot but feel attracted to the educated German officer who can offer practical help and who reconnects her with her young girlhood encounters with poetry and stories that she heard from David Jones while he was staying with Eric Gill and the community of artists at Llanthony Abbey.

In the farmhouse he has requisitioned, Albrecht, the officer, can feel the indentations in the kitchen table that generations of farm hands have made with their elbows. He longs to be able introduce Sarah to the world of art and culture that the war has forced him to abandon, but how can these two, at once attracted to each other but separated by their backgrounds and the circumstances of war, relate to each other? The situation reminded me of the intense way that Irene Nemirovsky treated the subject in Dolce, the second part of Suite Francaise, though that was written under the pressure of the actual German invasion.

How far is it possible to discern the human face beneath the mask of the enemy? When does trust become reprehensible collaboration? It is this territory that the novel so delicately examines, leaving the question open. I felt nourished by the experience of reading this novel and now want to seek out the author’s previous work: http://www.owensheers.co.uk/

This review made me want to read the book. I was, at first, disappointed. Setting the scene, with what seemed- but was it my own impatience? – rather laboured descriptions of that lonely Welsh valley and of the women left to farm without their husbands, took a long time. And yet, I know that country a bit, and love it.

For me, the book came to life with the arrival of the Germans, and then their work together with the abandoned women during the long snowed-in winter, for sheer survival. During this part of my reading I did not worry about the ending- just like the characters in the book. But finally the thaw did come- and contact with the outside world was bound to take place. What would happen? Would old enmities resurface? Who would prove to be the biggest danger- the English/Welsh insurgents, or the German army wondering why that unit had not contacted them for so long? Could the frail but precious resumption of a more human existence by the soldiers survive the effects of war?

The author’s “Afterword” seemed to sound a different note. I found in it the sound of justification: “The struggle against fascism” brings us back to the world of clichés. Assassination led- in actuality, and in the book- to terrible reprisals by the occupying army, the loss of many innocent lives for the sake the death of one enemy. And the “insurgents” of the resistance- in other countries and other times they are called terrorists.

Then I reread the review, and appreciated it all the more.