A journey in Bhutan

In 2007 we flew from Kolkata into Paro, which has the only airport in Bhutan, my husband, to study the Buddhist Art, and I to look at textiles. Paro has the National Museum, housed in a 17th century circular watchtower on seven floors. It has a well-displayed collection of local costumes, including the many minority tribes from Eastern Bhutan.

A journey along rivers and mountains, took us to the capital, Thimphu, where we were lucky to catch a display of regional weaving in the main square, mainly made by the Arts and Crafts School.

One of the King’s four wives, (women are also allowed several husbands) Queen Wangchuck, is patron to the excellent Textile Museum. About weaving, she says it “reflects our distinctive identity, regional diversity, changing fashions, and social status”.

This is shown by superb displays of lavish silk brocaded womens’ robes (kira) and belts, looms, demonstration of techniques, and the silk appliqué, patchwork and embroidery done by men to decorate the temples. Three hand spun and hand woven narrow cotton strips with brightly coloured silk supplementary wefts, are sewn together to form the dazzling patterned wraps worn by the women. This work is very skilled, slow and expensive; the silk patterns look like fine embroidery (See below). Thick woollen narrow strips decorated with inlays of naturally dyed wools, woven on backstrap looms, are sewn together to form shepherds’ raincoats. 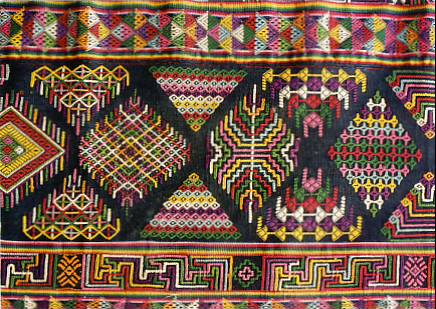 In Bumthang we attended a festival, which commenced in darkness, when a tunnel of green branches was set on fire and people ran through the flames to purify themselves. It culminated in a naked mens’ dance after midnight. (No photography allowed). Next day costumed dancers wearing wooden masks of deer, garudas, pigs, and wrathful deities decorated by skulls, pranced on the grass enclosure in the monastery to the beat of a single drum. Between dances, women chatted in their prized kira, and brocade jackets. 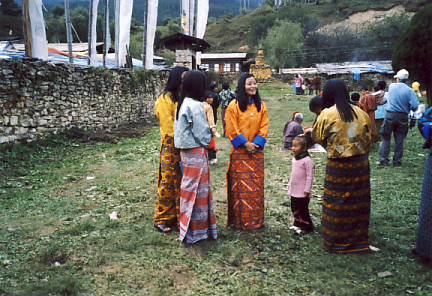 Our interpreter had packed his precious wild silk man’s coat (go) brocaded in a traditional pattern, to wear at this festival. They are woven in Eastern Bhutan, which has the main textile production areas. The ceremonies were all performed by local people, not monks, to celebrate the freeing of a princess from a local demon, by the sage and teacher Padmasambava, who flew in from Tibet.

Traveling back through Thimpu, we visited the Arts and Crafts School built by the Royal Government of Bhutan, which has laudably encouraged and saved the thirteen crafts of Bhutan. These include thanka (religious scroll) painting, clay sculptures of deities, embroidery, weaving, woodcarving, and metalwork. All of these play a vital part in the functioning and decoration of the monasteries and temples.With so many reincarnated lamas in Bhutan, there are many monasteries to be furnished and decorated.

We were very impressed by the craft school, and were able to visit the classrooms and see the students working. The clay sculptures of Buddhist deities, which are painted for the temples, were outstanding. Their thanka (religious) painting is also of a very high standard. They are using pigment paints made from ground up rocks and semi-precious stones.

We visited 19 monasteries, and were surprised and impressed by the vitality of the newer ones, expressed in the enthusiasm of the chanting with drums, cymbals, and seven foot long trumpets, which vibrated your very bones, and in the devotion and attention paid to the sand mandala creation, which would be destroyed after the ritual for which it was made. 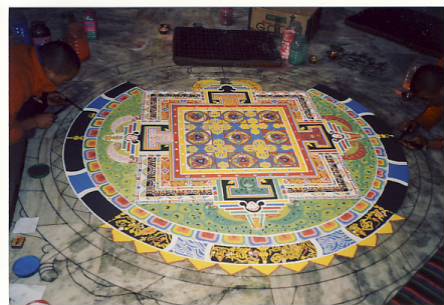 Sand mandala created by the monks

Logistics and price forbad our proposed longer trip to include Eastern Bhutan. When they build an airport there it will be well worth a visit by textile enthusiasts.

From the Land of the Thunder Dragon – Textile Arts of Bhutan,
by Diana Myers and Susan Bean. Serindia Publications.

Reproduced from the newsletter of The Oriental Rug and Textile Society. Visitors are welcome to attend lectures for £4 per lecture. Drinks and nibbles are served, and we now have a T-loop induction coil for deaf-aid users.