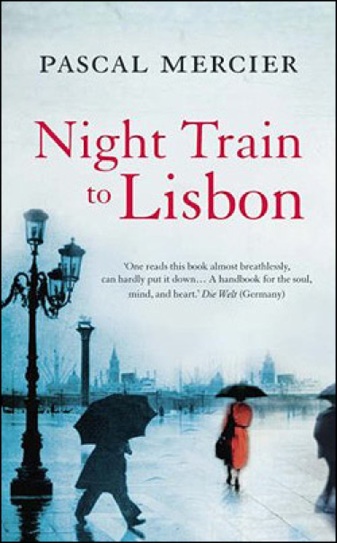 A novel by Pascal Mercier. Published in England by Atlantic Books in 2008

To walk away from the constraints of everyday life in order to embark upon a quest into the unknown is a powerful archetypal theme and in this novel it is given a vivid contemporary setting. The protagonist, Gregorius, a dry but erudite schoolteacher who has buried himself in classical texts, experiences a shock that propels him from his native Berne to Lisbon. He has become fascinated by a book of poetic self examination in a language he does not know and feels compelled to seek out the author, Amadeu Prado, a Portugese aristocrat who practised as a doctor.

Gregorius steps out of his old life at first tentatively, with some resistance, but gradually he warms to the task of finding out all he can about Amadeu Prado through contacting the doctor’s family and friends. In this way the story builds with the momentum of a detective novel. At the same time it recounts an inner journey causing Gregorius to review his own past and face his shortcomings. In one encounter after another he is in a sense opening doors that he had once firmly closed and as he has to find his way around Lisbon, the different quarters of the city spring to life on the page. He has to learn a new language, Portugese, but since his feelings are touched in a new way he is also beginning to learn the language of the heart.

Extensive extracts are included from the writings of Amadeu Prado revealing his inner conflicts and questioning of the suffering inherent in human life: ‘Memory is overheated. I am breathlessly busy retrospectively assembling the fleeting images of the event into an illusion of something intelligible. I always come too late, how fast the light of attention to things scurries off. Everything is always already past. I am always left empty handed. Never am I there’.

His is a life influenced by family pressures and the conflicts of conscience inherent in living under a political dictatorship. As Gregorius discovers, the emotional climax comes when Amadeu feels for a moment that he has touched his true self in all its unrealised potential. But his bid for freedom and wish to be united with the woman he loved was doomed to failure. He becomes the wounded hero. A mantle taken on in an enigmatic way by Gregorious himself. One should not disclose the ending except to say that through the journey, by the time he returns to Berne, Gregorius has become more open, less of an isolated outsider than he was before; the people he has engaged with, whose sufferings he has shared, have become very dear to him and by abandoning the set pattern of his former life he has developed the broader and deeper understanding that he was instinctively seeking.

It is a long, many layered book that has been ingeniously structured. Those who can read it in the original German are fortunate since the American/English translation, seems in places to have been a rushed job. There are small points of phraseology and vocabulary that should be corrected in order to do full justice to the author’s intention.